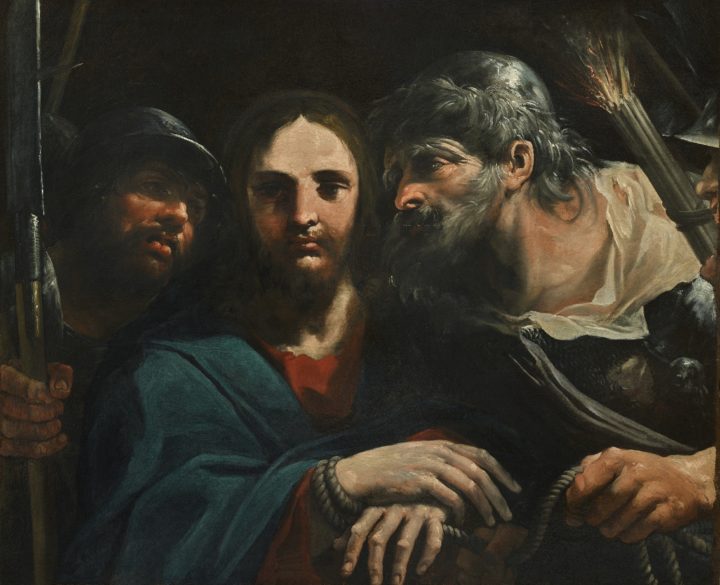 This picture, of great quality and in a perfect state of conservation, represents the captive Jesus flanked by his tormentors, just after his arrest, in a dark, nocturnal setting which the torch held by a soldier in the right foreground does nothing to lighten. The intensity of Christ’s expression – emotionally and mentally beyond the action since he is aware of what he will shortly have to suffer, absent, indifferent to his captors’ insults – is underlined by the choice of composition, which is closed into the small space that contains the protagonists of the drama. The work is obviously by a painter of importance: an artist entirely involved in the meaning of the story he must tell, with an intelligently developed natural talent that is clearly conveyed by the invention and magnificent truth of an unusually vivid, confident image. There is a telling contrast between the warm hues of Christ’s flesh, albeit partly in shadow, and the deep blue of the cloak and the red of the robe; and a remarkable pathos in the compositional scheme, with its compressed space, admittedly set in the open but limited by objects, creating a scene that has so much primordial significance for humanity. The qualities we have briefly described indicate the author of this splendid picture as Giuseppe Maria Crespi, the artist who, from the end of the 1600s to the 1730s gave back to Bologna its leading role – the historical role it had assumed with the Carracci and the Incamminati, and which remained the obligatory model for all talented artists, not only in Italy but in the whole of Europe, for two centuries. The work’s cultural roots are entirely inspired by Guercino – by his contrasts of light and shade, solid construction of forms and rich, solid handling of pigment: a master Crespi admired in his youth to the point of copying several of his most famous pictures. Indeed Crespi’s version of Guercino’s Saint Francis in Ecstasy with Saint Benedict, which appeared in the commemorative exhibition of 1948 conceived by Roberto Longhi, dates from his early years. This was when Crespi (who was then sharing a studio with Giovanni Antonio Burrini, after his apprenticeship with Domenico Maria Canuti and later with Carlo Cignani) was putting into practice the lessons learned from lengthy study of his Bolognese predecessors and during his travels in the Veneto, Parma and Modena, and Pesaro and Urbino, where – if we believe his own son Luigi, Zanotti and Lanzi – he spent time immersed in study. This studious period yielded pictures such as the Noli me tangere from the Mahon collection in London, which shares with the present work a sombre tonality of palette and the same sort of brushwork; and, even more so, the magnificent picture in San Salvatore in Bologna, the Saint John the Baptist Preaching, one of the first works to which the young, promising artist gave his all, and a true masterpiece.

Both the gospel episodes share some of the same qualities: the drawing is identical in the rendering of the drapery folds and anatomical description; the passage from shadow to light in the faces is very similar; and the description of figures in the immediate background is marked by the same swift white highlighting where details need to be accentuated. Even some moments of awkwardness (for example, in Christ’s hands) have a parallel in the Baptist mentioned above; we may thus proceed to the comparison with the extraordinary altarpiece in San Nicolò degli Albari, the Saint Anthony Abbot Tempted by Demons, Crespi’s first public success (1690), commissioned by Carlo Cesare Malvasia, to the last an expert in recognizing talent.

I believe that the Arrest of Christ, which may therefore be considered an important addition to Crespi’s catalogue, can be dated a little before the Saint Anthony – that is, somewhere between 1685 and 1690, the most intensely Baroque period of this master. One must also remember what Luigi Lanzi wrote about how he painted, using terms not intended as positive but which recreate the creative process for us: Crespi had the habit of using “few colours, principally chosen for the effect they were to produce, of poor quality and very oily; gums employed for colouring which others use for softening; and frugal brushstrokes, applied with intelligence”.

We may recall that in the 1970s this picture was on the British art market, in the Trafalgar Gallery, catalogued as by an anonymous Roman master of the seventeenth century, influenced by contemporary Bolognese painting. Such an attribution, reflecting an opinion given by Carlo Volpe, can only strengthen what we have said, given our improved knowledge of Crespi’s oeuvre, as there are indeed strong similarities between the early pictures by Crespi and those by artists such as Annibale Carracci and Lanfranco.