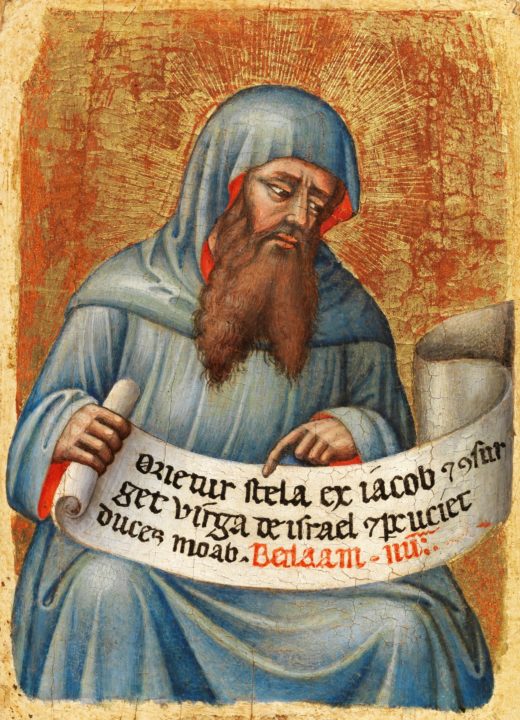 In Bologna during the second half of the fourteenth century a true school of painting emerged from the thriving workshop of Vitale degli Equi (active 1330-1359). Among the most prominent artists in this period was Simone di Filippo, better known as Simone dei Crocifissi. The epithet, which appeared in the Counter-Reformation period, reflects an appreciation for his talent in representing sacred images, in particular the Crucifixion.

These two seated prophets have a monumental stature and belong to a much later period of Simone’s career, in the 1380s. They are conceived in broad planes and wear ample, pale-tinted robes, in contrast with the brilliant colours of their linings. Under their hoods, which cover their brows and ears, their faces are defined by stern expressions and large, forked beards.

Each prophet holds a long parchment scroll, providing unequivocal evidence of his identity. The first is the famed prophet Isaiah, who foretells the birth of Christ (Is. 7,14): “Behold, a Virgin shall conceive and bear a son, and shall call his name Immanuel” (Ecce virgo concipiet et pariet / filium et vocabitur nom (en) emmanu / el. Ysayas. Cap(itul)o vii).

The second (here presented), certainly less well-known, is the diviner and necromancer Balaam. According to the Book of Numbers, the fourth book of the Old Testament, he was summoned by the King of Moab, Balak the son of Zippor, to curse the Israelites who were crossing his kingdom. Balak feared that after their victory over the two Amorite kings, Sihon and Og, they might also defeat him; he therefore sent envoys to Balaam, who after some resistance resolved to follow him. Having joined Balak, who led him up to the heights of Bamoth-Baal, from where he could see the Israelite camp, Balaam pronounced four oracles before the king. These were dictated directly by God and turned out to be celebrations of Israel’s strength and power. The long scroll held by the diviner bears the last and most renowned of these prophecies (Nm. 24, 17): “there shall come a Star out of Jacob, and a Sceptre shall rise out of Israel, and shall smite the brow of Moab” (orietur stel[l]a ex iacob et consur / get virga de israel et percutiet /duces moab. Berlaam. Nu(meriis).). The star and sceptre clearly allude to the birth in Israel of a victorious king, identified by Christian exegesis as the Messiah.

Together with the prophets Zechariah and Solomon (these in a now unknown location), Isaiah and Balaam were placed on the upper reigster of a polyptych, as implied by the di sotto in sù viewpoint of the figures, designed to be seen from below, and depicted as they appear to lean slightly forward to gaze down at what was represented in the main registers below. In these Prophets one can see that the dreamy painting of Vitale, which was so important for Simone, has now been curbed by more accenutated sculptural qualities and a richer, denser chiaroscuro; likewise, the unrestrained Gothicism of Vitale is now contained within a clearly-regulated sense of space.