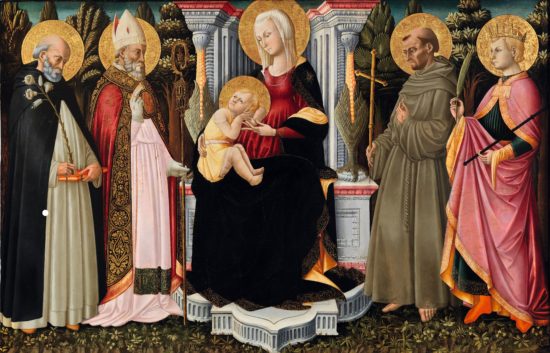 Only very recently has it been possible to identify the provenance of this altarpiece as the collection of Ferdinando de’ Medici, Grand Duke of Tuscany from 1587 to 1609. Painted around 1450-1452 by Neri di Bicci, the last member of a dynasty of Florentine painters, this work reveals his response to the new language of the Renaissance.

Renouncing the traditional gold background in favour of an outdoor setting, rare for this artist,

the composition echoes the latest developments by Fra Angelico, although Neri dwells on a minute approach to the description of the meadow, reflecting his Late Gothic inheritance. The same stylistic combination is evoked by the architecture of the throne, in which the Classicizing language of Brunelleschi, Donatello and Lippi exists alongside the sinuous “International” idiom of the dais. The painting is fascinating for these very contradictions, affording us an invaluable example of the enduring coexistence in Florence of tradition and modernity.

Acquired by the Virginia Museum of Fine Arts, Richmond