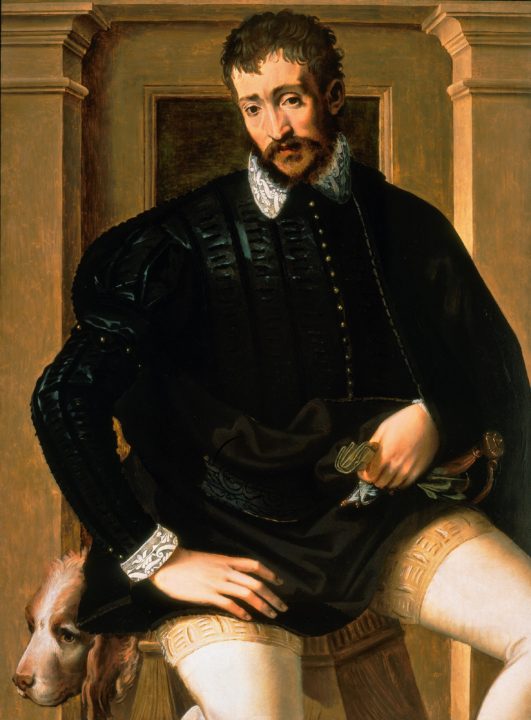 Traditionally given to Francesco Salviati, this portrait was reattributed to Michele Tosini by Philippe Costamagna. This change in attribution is in no way surprising, the activity as portrait painters of the two artist having often been confused; and if today the production of Salviati is beginning to be more clearly defined, that of Michele Tosini remains less well-known. The only portrait which is universally accepted by the critics to be by the hand of Michele, the Portrait of a hunter previously in the Antinori collection, is nevertheless witness to the great capacities of the artist in this discipline.

There exists no monographic literature about Michele Tosini’s work and only a few rare studies on precise points. His workshop was however one of the most important in Florence during the second half of the 16th century and many artists were trained there, notably Francesco and Giovanni Brina, Francesco and Bartolomeo Trabalesi, but also painters of prime importance such as Girolamo Macchietti, Mirabello Cavalori, Andrea del Minga and Bernardino Poccetti. The low level of interest manifested by art historians is probably explained by the fact that he was more a head of workshop (in the Quattrocento tradition) than a court painter ; what is more he took over his master Ridolfo del Ghirlandaio’s workshop, which he directed right up until Ridolfo’s death in 1561. The renown of this famous workshop and the number of its artists is probably the reason why Giorgio Vasari called upon Michele, in order to second him, on the impressive site of the Palazzo Vecchio. Vasari used in particular his talents as a portrait-painter, as the number of effigies that recent critics tend to attribute to him would imply.

Among the works that have a sure attribution, our Portrait of a man is similar, as much by the rapid brush-strokes as the powerful modeling, to the figures from the Baptism of Christ in the Pinacoteca Nazionale, Ferrara, or to those of the Martyrdom of the ten thousand from the Museo del Cenacolo di Andrea del Sarto in San Salvi, Florence, dated circa 1555. It is around this date that it is appropriate to place it. The clothes that the model is wearing, a lacework shirt with a turned down collar and a slashed doublet with puffed shoulders, are indeed characteristic of what was fashionable in the middle of the 16th century.

This man posing with his dog, sitting in a carefree way on a stool, his legs apart and his cape pulled over his knees, is typical of the mannerist portrait. Historians often preferred to see in Michele the very example of a conservative artist, insensitive to what the Maniera could bring. Only the sagacity of the most clairvoyant among them has revealed the double register of expression of the artist who “stayed forma and sad in the religious works, while he reserved all his freedom for the profane works”. The two allegories of The Aurora and The Night (Rome, Galleria Colonna), Michele’s masterpieces, indeed show that the artist was capable of assimilating the innovations of the new style and of participating in its dissemination.

When Florentine mannerist portraits are discussed, it is the examples of Agnolo Bronzino and Francesco de’Rossi, called Cecchino Salviati, that are used as references. This Portrait of a man by Michele Tosini is comparable to the most fascinating works by these artist ; notably the character has the same aura of mystery as that which emanates from the Portrait of Bartolomeo Panciatichi (Florence, Galleria degli Uffizzi) and the Portrait of a man (Ottawa, National Gallery of Canada) by Bronzino, or from the Portrait of man (Saint Louis, Saint Louis Art Museum) by Salviati. These different portraits are so extremely similar in their poses that it is difficult not to imagine that they were the result of a concerted intention ; Michele, less inventive, probably received more from the two others. The architectural background in our picture for example, identical to that in the Portrait of a man with a sword painted by Salviati (Naples, Galleria Nazionale di Capodimonte), could have been a direct suggestion by its author. Each artist however kept his own personnality : Bronzino is cold and perfect, Salviati manifests a taste of strangeness, while Michele, more in the Florentine tradition, shows a special type of charm.

The dog and the sword are symbols referring to the character portrayed. They may imply, as chivalrous attributes that the man belongs to a noble family. In this it is comparable to the Portrait of a hunter previously in the Antinori collection, where the model poses with his pack of hounds and his footman. In the 16th century, traditional codes are however not necessarily always applicable. In Francesco Salviati’s case for example, the artist depicted his principal commissioners, members of the Salviati family, with similar attributes (Giovan Battista Salviati with a helmet or the cardinal Giovanni with his pack of hounds), which symbolized this family of bankers’ aspiration to aristocratic recognition. In Florence, in the second half of the 16th century, following the establishment of the dynastic rule of the Medici and with the encouragement of the Emperor, many Florentine families with merchant backgrounds claimed legitimacy for their nobility. This use of the portrait as means of personal propaganda was very widespread in the Italian peninsula, to the point where at the end of the century theorists such as Cardinal Paoletti or the painter Lomazzo felt obliged to condemn this type of practice. In mannerist portraits the emblems moreover could have several different – but compatible – significations. The dog symbolized fidelity, but also underlined the qualities of vigilance, vigour and sexual prowess (here amplified by the unusual position) of the character portrayed. All these elements, associated with the model, turned him into the perfect man as he was defined in the Courtisan by Baldassar Castiglione.