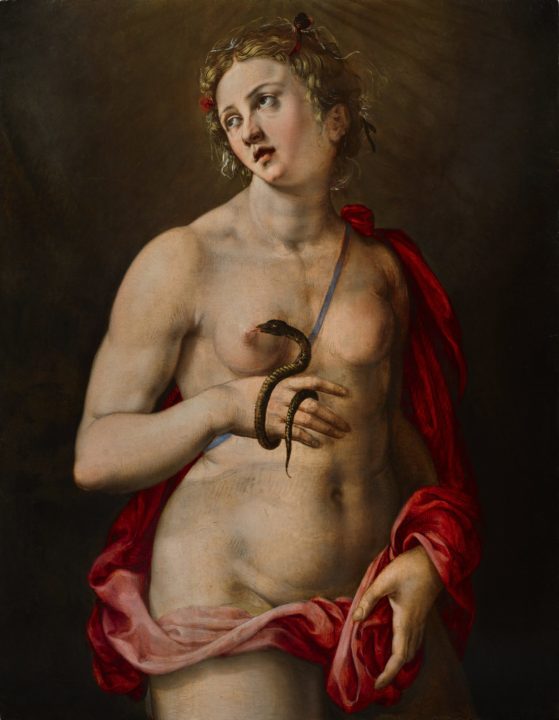 Several sixteenth-century sources tell us of Michele Tosini’s importance in Florence around 1550. He was the principal pupil of di Ridolfo del Ghirlandaio, and for this reason, as Giorgio Vasari stated, he was “known by no other name than Michele di Ridolfo”. His works were carried out with “very beautiful mastery” (“bellissima pratica”). “And – Vasari continues – on account of his goodness and capacity, I have employed him several times, together with others, in the works of the Palace [the Palazzo Vecchio], with much satisfaction to myself and everyone besides. But that which pleases me most in him, in addition to his being a truly honest, orderly, and God-fearing man, is that he has always in his workshop a good number of young men, whom he teaches with incredible lovingness”. Vincenzo Borghini bore witness to the significance and wide-ranging character of Michele’s workshop in a letter of 1565 to Cosimo de’ Medici regarding the decorative projects for Joanna of Austria’s ceremonial entry into Florence when she married Francesco I. Borghini put forward the names of the only three largest Florentine workshops capable of carrying out such an elaborate ensemble: the botteghe of Giorgio Vasari, Bronzino and Michele Tosini, and he wrote of Tosini that “he is of sound judgement, and able, and has a handful of good young men; and you can certainly trust him”.

Notwithstanding the evolved language of his art, attentive to changes in style and to the innovations brought to Florence by outsiders, the fact that Michele Tosini was categorised among the painters endowed only with “pratica” seems to have influenced all subsequent scholarship, robbing our artist of his role in the forefront of the Florentine tradition of varietas – a varied approached to idiom that endured through the whole of the sixteenth century. This began with Domenico Ghirlandaio and continued for decades, gradually updating itself as styles changed, while remaining essentially Florentine and loyal to traditionally-minded patrons like convents and confraternities.

Michele Tosini thus played an important role in the Florentine art world, and it must have been a very specific one, given that he was named by Vasari himself among the founders of the Accademia delle Arti del Disegno in 1563. The painter then appears in another letter of 1565 written by Vasari to Borghini at the time of the decoration of the ceiling of the Salone dei Cinquecento: “Michele has done some drawings, and needs assistance; this morning he was with me, and I’ve put everything in order, and it will follow your disegno [design or drawing], which is good” (“Michele ha fatto alcuni disegni, e ha bisogno di aiuto, stamani è stato meco, ed ho ordinato il tutto, che sarà secondo il vostro disegno, che è buono”). These words, which probably refer to drawings or compositions given by Vasari to the young painter, are evidence of a long and fruitful collaboration between the Aretine artist and the heir to the Ghirlandaio workshop. As in Borghini’s letter, Tosini’s prolific workshop is also mentioned by Vasari, a place where a number of young painters were summoned to replicate his works, not always with excellent results. That output included a large number of sacred paintings, especially of the Virgin and Child or the Holy Family, sometimes low in quality and usually assembled under the master’s name, but so repetitive and uninventive that they often have the effect of polluting the standing of his autograph paintings.

This beautiful panel of Cleopatra belongs to the autograph oeuvre of Michele Tosini, and like his other paintings of single female figures of heroines, saints, or ideal heads, it can be dated to the years around 1564, when he was involved, among others, in creating the catafalque for the funeral ceremony of Michelangelo. It was thanks to this Florentine event that the city witnessed a strong revival of interest in the great artist, and a widespread adoption of his motifs – all part of the burst of stylistic energy that ran through the Florentine milieu immediately after 1550, with the publication of the first edition of Vasari’s Lives of the Artists and thus of his initial codifying of michelangiolismo, which was reasserted as the benchmark of the arts, after his death, in the second edition of 1568.

It is to this period, which also saw the foundation of the Accademia delle Arti del Disegno (1563), that we can date some of Tosini’s most beautiful works, such as the allegorical panels in the Galleria Colonna, Rome, in which the painter recreated the figures of Night, Dawn and Venus and Cupid, developing inventions by Michelangelo and setting the dry bareness of those now canonical marble nudes in a descriptive, carefully-structured landscape. These pictures all looked to the late genius for their drawing, while their style was freely inspired by the work of Vasari and Salviati. For Tosini, these last two painters had been models to follow ever since his collaboration on the frescoes in the Palazzo Vecchio, and the elements of Vasarian style, with a marked use of disegno, are evident in this Cleopatra, particularly in the face and incisive depiction of anatomical details, while the fluid manner of Salviati is recalled by the all’antica cloak that wraps itself around the sinuous body. Tosini was also inspired by works from the middle years of the century, in this case by Bronzino, in the brilliant contrast between the flesh passages and the red lake of the drapery. The tone of the latter is skilfully picked up in the hair ribbons and evokes the accents of bright colour in Bronzino’s paintings of the preceding decade like the altarpiece with Christ in Limbo in Santa Croce.

We may date a whole series of works by Tosini to the 1560s: heroines like Lucretia, or ancient monarchs like Cleopatra, or even saints, such as Mary Magdalen, all handled with transparent, swift brushwork which serves as comparison for the attribution of the painting before us. In this panel, too, the fine paint layer has with the passing of time revealed the artist’s careful draughtsmanship, created with parallel hatching: this defines the anatomy and lays out the chiaroscuro prior to painting, as seen in the raised right arm projecting its shadow onto the figure’s abdomen. Comparisons with this Cleopatra may be found in the Magdalen in the Museum of Fine Arts, Houston, or the Leda and Lucretia, both in the Borghese Gallery, Rome, where the female figures are elaborately-coiffed and wear flowing dresses redolent of Salviati. The fluid execution of our figure’s hair, described with liquid, freely-applied pigment, also reveals Tosini’s study of Salviati’s work of the sixties, blending it with Vasari’s rigour of design.

In conclusion, further parallels can be drawn with panels mentioned by Hornik, such as the Mary Magdalen offered nearly a decade ago at Sotheby’s, its design also used by Tosini for a painting of an ideal female figure similar to ours, in the Palazzo Pitti in Florence, published by Marco Chiarini. All these works testify to Michele Tosini’s ability to adapt the models of Michelangelo and Vasari to the taste for elegance and magnificence that was so dear to the Medici court in the last years of Grand Duke Cosimo I, which in the early 1570s was then to take on its ultimate form in the Studiolo of Francesco I.