The Baumgartner Cabinet << Back 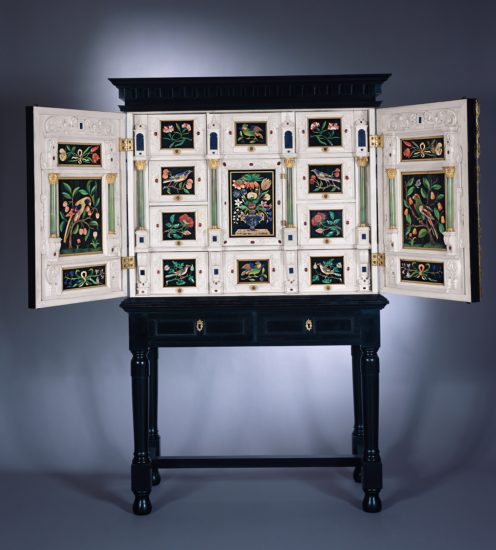 THE BAUMGARTNER CABINET
Veneered in ivory and exotic woods, inset with pietra dura

This cabinet is extraordinary for its size and decoration, composed of gemstones and ivory. It is adorned with seventeen pietra dura panels from the Florentine Galleria dei Lavori, the Medici Grand Ducal workshops, as well as eight green alabaster columns, a series of lapis lazuli plaques, and small aventurine ovals.

The central door is decorated with an image of a double-handled vase with a spectacular  bouquet of flowers around a Corona Imperialis, a rare type of fritillary particularly favoured at the beginning of the seventeenth century. The ivory surfaces, which have been protected by the closed doors of the cabinet, are delicately carved with volutes and, on the central section, fantastic female busts.

Closed, the cabinet seems severe and relatively modest; opened, it reveals a six and a half foot expanse of splendour, its rich interior enlivened by the brilliant colours of the pietra dura offset by the whiteness of the ivory ground.

Acquired by the Liechtenstein Museum, Vienna