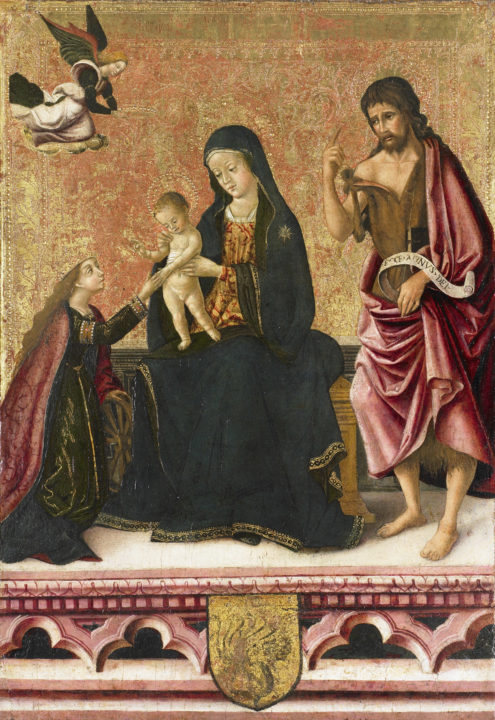 The panel discussed here, created for personal devotion, represents the so-called Mystic Marriage of Saint Catherine of Alexandria: the Christ Child is shown grasping the holy martyr’s right hand with his left, while blessing her with his right hand, in this instance replacing the canonical gesture of placing a ring on her finger, emblematic of their mystical union. Standing in the same pictorial space is Saint John the Baptist, while an Angel descends from above, at left, holding a crown – incised on the gold ground – destined for the head of the Virgin Mary. These peculiarities hardly seem fortuitous within the context of the birth of this picture, since the composition arrangement is shared on an iconographic level by the triptych in the church of San Giovanni Battista at Monte San Biagio in the Province of Latina, south of Rome, painted by Cristoforo Scacco and dated 1500. There, the Child’s gesture is identical, and the scene also includes the Baptist, in this case paired with John the Evangelist; and two angels crown the Virgin.
The figures in the painting before us are set on this side of a Renaissance-style marble balustrade and stand on a floor that slopes downwards towards the immediate foreground. An architectural frieze runs along the front of this space, its function essentially decorative, and consisting of a sequence of small, perforated trefoil arches, late Gothic in idiom, set within a convex cornice with foliate motifs and dentils. A worn, unidentified coat of arms appears over the central arch, revealed by X-radiography in 1991 to have been added after the completion of the painting, even though it is early in date; the paint layer under the shield bears a complete depiction of the hidden arch.

Our knowledge of the work’s provenance starts with the early twentieth century, when it belonged to the collection of Baron Heinrich von Tucher in Vienna, where it remained until 1925. Offered for auction in that year at Cassirer & Helbing in Berlin (von Falke 1925), it entered the collection of Ludolf and Edith Rosenheim in the German capital, and then, auctioned anew in December 1930 at Frederik Muller in Amsterdam (Tableaux 1930), it passed to the celebrated art dealer and connoisseur Jacques Goudstikker (1897-1940); the catalogue of his Amsterdam gallery’s latest acquisitions, published in November 1930, appeared too early to include the picture. The Dutch dealer may have acquired it on the advice of Raimond van Marle, his principal consultant in that period for the purchase of Italian paintings (see Important Old Master Paintings 2007, p. 14), who was the first to illustrate it, soon thereafter. When the Second World War broke out, Goudstikker fled his country, leaving behind about 1300 works, including this Mystic Marriage, that were requisitioned by the Nazi authorities in 1940. At the end of hostilities, this opulent collection returned to Holland, and our panel was stored until 1948 with the Stichting Nederlands Kunstbezit and subsequently with the Institute of Art History of the University of Groningen, and then from 1987 onwards at the Bonnefantenmuseum in Maastricht (inv. 3458; de Jong-Janssen 1995). There it remained until 2006, when it was returned, together with other items, to the Goudstikker heirs.

Now, to come to the question of attribution, it must be said that the ties with the little altar painting formerly in the Santocanale collection in Palermo and now in an unknown location are so close that we can only confirm the opinion given by Causa and other scholars. The principal figures in both of these small-format paintings are touched by restlessness, and caught in a lively, slightly unstable movement, or in a barely-hinted springing forward of their lean, athletic bodies, not without a certain irregularity of form.
Comparisons between the two versions of the Baptist, wrapped in a cloak with deep, broken folds, the angels, or the smiling expressions of the three martyrs in the topmost part of the Palermo panel and the flying angel in our painting, are eloquent. To this we can add the dense, uniform decoration of plant-like volutes on the gold background, enriched by the same motifs (for example, the sequence of trefoil arches bordering the floral pattern in the Mystic Marriage, repeated in the central section of the ex-Santocanale panel), which can be found with variants in Scacco’s decorative repertoire, whereas they are almost absent in the customary procedures of Antoniazzo’s workshop.
The Palermo panel bears an inscription on a double register, above and below the principal painted subject, its capital letters worn away at the ends, and thus hindering a straightforward reading. Photographic reproductions show the following: “TVCIVS DE GIOFREDA DE FVNDIS F[…]OC OPVS”, and below, “[…]D. M CCCC L XXXX I”. Bottari (1959), as we have said, regarded the first part of the inscription as ending in “F(ieri) F(ecit) HOC OPVS”, and had no doubt about deciphering the date, so that we may rule out the first reading of 1494 (Causa 1952) as well as the other, supposed by Andaloro (1974-76) to be 1499. Vigni and Carandente (in Antonello da Messina 1953) instead read it as “Tucius de Giofreda de Fundis fecit hoc opus / A.D. M CCCC L XXXXIV”. Given the impossibility of first-hand inspection, and taking into account the question of the status of the individual named in the inscription, about whom no other documentary reference is currently known, we have chosen here to consider Tuccio di Gioffredo (or di Gioffreda) as a name for classifying a small but homogeneous body of paintings. An alternative name for ‘Tuccio di Gioffredo da Fondi’ would be the Pseudo-Tuccio di Gioffredo, suggested by Naldi (1986) and Pugliatti (1998).
This artist’s profile, based on the starting-points provided by the former Santocanale and Goudstikker pictures, is that of an artist who draws his inspiration from Antoniazzo Romano and then turns above all towards Cristoforo Scacco, who had begun to work in Caetani territories in the 1480s (he was to take citizenship in Monte San Biagio) before moving south to Campania. The figure of the angel in our little panel and those of the saints in the painting formerly in Palermo reflect an awareness of models such as the Annunciation in the triptych in San Pietro in Fondi, in which Scacco revises his style, as formed in Verona and Padua, to reflect the latest tendencies in Central Italian painting. The broken and slightly angular line of draperies and gestures offers a precise echo of this. Details such as the hem of the wind-blown dress above the right sleeve of the angel crowning our Virgin recur in the angels of Scacco’s Coronation of the Virgin triptych now in the Capodimonte Museum. The sequence of little arches in the foreground simulates the frames of the polyptychs produced in Lazio and Campania during the Quattrocento, ranging from Giovanni da Gaeta to the altarpiece in the Diocesan Museum in Gaeta, formerly attributed to the same author as the painting discussed here. This work – with a provenance from the same church that houses Antoniazzo’s triptych, cited above, and the Annunciation triptych by Scacco – also attests to the widespread influence of the latter’s culture, with stylistic elements close to Riccardo Quartararo (the sculpturally-rendered faces of the Virgin and deacon saint, and the swollen, fleshy lips), but without the Sicilian- and Valencian-inspired surface qualities that are typical of that painter. The strong resemblance between the angels in the main panel and the Saint Agatha, on the one hand, and the figures in the Santocanale and Goudstikker panels, on the other, make it very likely that our painter was present, as a collaborator of Quartararo, in the execution of this much-debated group of panels, and even more so in the polyptych in the church of Santa Maria Maggiore a Piedimonte Matese (Province of Caserta, ascribed to Tuccio di Gioffredo by Ferdinando Bologna.
The thrones and their complex outlines are constructed in a similar manner, and there is a comparable interest in the robust language of Scacco, transposed into figures who are ultimately fragile and lanky. Alparone (1973) noted how the Baptist in Piedimonte Matese seems a mirror image of the panel before us.
The question of Quartararo’s presence in the geo-cultural context considered here is the subject of some debate, but the partial accord of his language with that of ‘Tuccio di Gioffredo’ seems evident in passages such as the Saint Catherine in our panel, which may be compared both with Scacco’s Annunciation, mentioned above, and the Coronation of the Virgin by Quartararo in Palermo (Palazzo Abatellis); and, in general, one can also sense some similarities with certain protagonists of Neapolitan painting of the late 1400s such as Pietro Buono and Pietro Befulco (cf. the Saint Stephen altarpiece of 1490, now in the Capodimonte Museum).

The dating of the painting discussed here cannot be far from the one dated 1491, which could be slightly later, given its dimmer reflection of Antoniazzo’s art, which is more evident here. The comparisons we have made with the work of Cristoforo Scacco and other figures active in Campania indicate that we should not establish a much earlier date; the work was thus probably painted in the years around 1490, before ‘Tuccio di Gioffredo’ put his hand to the polyptychs in Gaeta and Piedimonte Matese.