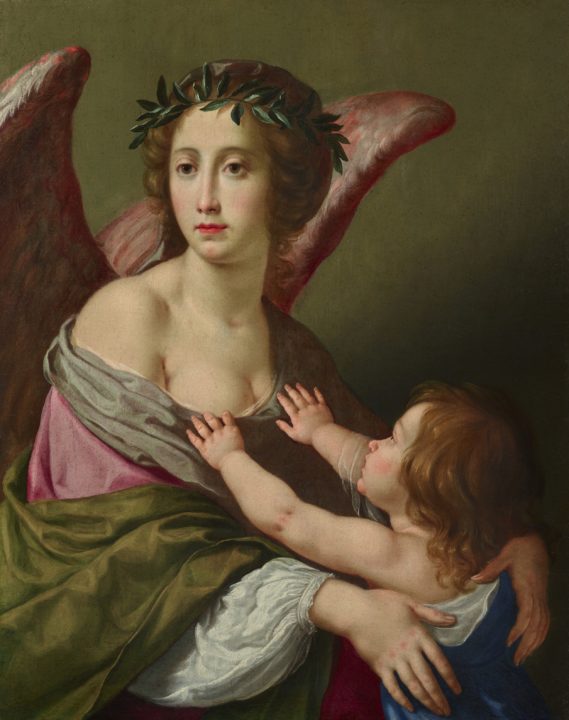 Refined and exquisitely dignified, this picture represents a winged female figure of ambiguous beauty, her head crowned with a laurel wreath and thus identifiable as an Allegory of Virtue. She is shown embracing a somewhat bashful child. Lacking any symbol or attribute that might provide a key as to how the painting should be properly read, the iconography in all likelihood alludes to a “concetto morale” (as in Filippo Baldinucci’s Notizie de’ Professori, 1681-1728, IV, p. 557) and may be interpreted metaphorically as a child’s aspiration to a virtuous education.

The painting, which appeared at auction at Sotheby’s, Florence in 1969 with the correct attribution to Cesare Dandini, was carefully studied by Luciana Cusmano, who noted that it is  “beautifully handled, and among the painter’s best works”, displaying some of the “constants of Cesare’s art; this is evident in the smooth refinement […] of the figure, with its full face and frontal pose, in the bright, clearly-defined tonalities, and in the skilled brushwork, which succeeds in creating effects of silken naturalism” (L. Cusmano, “Alcuni inediti”, in Quaderni di Storia dell’Arte Medievale e Moderna. Facoltà di Lettere e Filosofia, Università di Messina, I, Messina 1975, p. 29, pl. XXVI).

Suffused with subtle effects of light, which accentuate the flesh tones, as pale as those of a marble statue, and emphasise the stern, detached expression of the female figure, this composition shows a remarkable poetic and pictorial sensibility in its tonal harmonies, bringing out the arctic whites and intense greens and their jade reflections. These refinements seem to suggest a direct echo of the French “new wave” of Simon Vouet, visible in works such as his Madonna of the Rose in Marseille or the Allegory of Virtue in the Louvre.

The face of the winged figure, though not found frequently in the painter’s oeuvre, nonetheless has features – the long, thin nose, the clean curve of the eyebrows, and the particular way the hair falls softly on the neck – that recall the figure of Mary in the altarpiece of the Virgin Giving the Rosary to Saint Dominic, with other Saints, painted by Cesare in 1641 for the church of San Giacomo d’Altopascio in Pontremoli. Resemblance to that painting, which is also clear in the jewel-like quality of the colours, suggests our canvas should be dated to the first half of the 1640s. Parallels for the soft, impasto-filled handling of the child’s flesh, and for his specific facial features, are found in several similar pictures by Dandini such as the Allegory in Algiers or the Charity in the Metropolitan Museum of Art, New York.