This new exhibition of Italian painting of the fourteenth and fifteenth centuries, following that dedicated to Italian Caravaggesque painters, enables us to return to the field that has earned us an international reputation.

Twenty-three paintings, presented by region, allow us to define the particular features of each one of these cultural areas.

This is without question the best-known region of Italy, with its twin poles, Florence and Siena.
Florence inaugurated a new language during the fourteenth century, established by Giotto as a reaction to the Byzantine tradition and its rigid, schematic idiom. This was brought to life by a clearer sense of space and a more coherent and rational expression of volume. The polyptych by GIOVANNI DEL BIONDO presented here is a magnificent example of this innovation. The great ANDREA DI NERIO, who was the leading figure of the School of Arezzo, shows his perfect assimilation of these principles in a delightful predella panel with The Visit of the Holy Family to Saint Elizabeth and the Young Saint John the Baptist.
The fifteenth century saw the emergence of Masaccio, whose frescoes in the Brancacci Chapel show a clean break with what came before: the elimination of ornament, grace and elegance of the Late Gothic style, and the construction of forms through a play of shadow and light, as well as profoundly expressive faces.
At the same moment Gentile da Fabriano took command of naturalism and courtly elegance, and the city of Florence earned a predominant role also thanks to great artists such as Fra Angelico and Filippo Lippi. The imposing Sacra Conversazione by NERI DI BICCI was the outcome of these varied influences.
During the 1460s, drawing, the study of anatomy and a taste for Classical Antiquity evolved within the workshops of Pollaiolo and Verrocchio, and students of the latter included Leonardo da Vinci, Perugino, Botticelli, Ghirlandaio and Signorelli. It is this realm of influence that led to the rare Battle by the MASTER OF MARRADI, as well as the later Leda and the Swan by BACHIACCA, which was inspired by a prototype by Leonardo.
In Siena, after 1430, Sassetta was the only painter to create a combination of local heritage and Florentine innovation, followed by the young SANO DI PIETRO.
The visionary language of the great Giovanni di Paolo, and then the subtle art of Vecchietta, among others, led Sienese painting into the Renaissance period, and Siena was further enriched by the presence of the highly original Liberale da Verona and Girolamo da Cremona. The Virgin and Child by BENVENUTO DI GIOVANNI, in which the drapery seems carved out of marble, reflects these new directions.

Giotto’s presence in Rimini at the beginning of the fourteenth century fostered an exceptional development of local art. The reaction to his legacy was a forthright, expressive realism, occasionally tinged with tenderness, and given especially memorable form by Vitale da Bologna. Vitale was to leave a lasting impression on the next generation, which followed in his wake in the city of Bologna, with works painted in an unfettered and original style. Evidence of this can be seem in two other magnificent works exhibited here: the Madonna of Humility by ANDREA DA BOLOGNA, dated 1372, in which the artist’s concern for ornament resulted in a sumptuous depiction of the Virgin seated between the moon and sun; and the signed Coronation of the Virgin by SIMONE DEI CROCIFISSI, an important unpublished addition to this master’s oeuvre.

Here too the beginning of the fourteenth century was marked by a sojourn by Giotto, this time in Padua. Painting in the Veneto would profit from this by a new use of colour, particularly through the expression of chiaroscuro.
PAOLO VENEZIANO is the most important painter of the period between 1330 and 1360, combining powerful facial expression and novel iconography – in this case the remarkable cosmic rings that encircle the Agnus Dei like a blue majolica plate.
The Veronese painter ALTICHIERO uses the lesson of Giotto to begin his search for a new language and a new form of realism, set within highly complex architectural decoration. His Virgin and Child presented here is one of only three known works on wood panel, and therefore extremely rare.

The first half of the fifteenth century saw the ripening of an international language in Piedmont, nourished by Burgundian art and works by Rogier van der Weyden, introducing a subtle naturalism, expressive intensity and a refined sense of colour.
It was essentially Giovanni Martino Spanzotti who made a lasting impression on the painters of the first half of the next century such as Gaudenzio Ferrari – who was later active in Vercelli and Varallo – and DEFENDENTE FERRARI. The latter’s work comprises a brilliant and highly refined blend of the last touches of the Late Gothic style and the mannerism of the Northern Renaissance.

This region, too, under the dominion of the Visconti, developed an international language, owing to multiform influences, both French and Northern European.
Trained in Pavia, Gentile da Fabriano worked in the Chapel of the Broletto in Brescia; and Pisanello, Bonifacio Bembo and Vincenzo Foppa prompted a totally new language, receptive to the principles of the Renaissance. The two latter painters, like the MASTER OF MIRASOLE, presented here, nonetheless remained loyal to a “natural” poetic universe.

Painting of the second half of the fourteenth century in Liguria grew around the art of Barnaba da Modena, who was active in Genoa from at least 1360 onwards, and was influenced by the constant presence of Piedmontese artists.
Within the substantially conservative context of this region in the first twenty years of the fifteenth century, and after a sojourn in Naples, ANDREA DE ASTE (The Crucifixion) developed an international idiom. He was a significant representative of the Late Gothic era in Genoa.

At the end of the 1420s, the leading figures of Italian painting of this period – Gentile da Fabriano, Masaccio, Masolino – were all in the Eternal City. Their interaction with Roman Antiquity fostered a language one could define as uncompromising. Composition and iconography were still tied to medieval canons, and the gravity and solemnity of ancient art endured, as one can see in the Mystic Marriage of Saint Catherine by TUCCIO DI GIOFFREDO DA FONDI.

During the 1420s, the impact of the prestigious art of Gentile da Fabriano was ubiquitous. Echoes of his art appear especially in Pietro di Domenico da Montepulciano and PAOLO DA VISSO. The latter was one of those Marchigian painters who worked in several other regions. In the cassone front presented here, the architectural features of the buildings and the explosion of pink are typical of the art of the Marches. 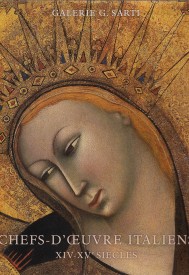