From Gothic Tradition to the Renaissance

This exhibition of early Italian paintings was especially significant, because after two months in our Paris gallery, it moved on to the Liechtenstein Museum in Vienna where it was on view from December 2008 to April 2009.

This was indeed a rare group of paintings, with some very great artists by whom few works have survived: Francesco Traini, the most important Pisan painter, c. 1325; Andrea di Nerio, the leader of the Arezzo school; and Giusto de’ Menabuoi, who painted the extraordinary frescoes in the Baptistery in Padua, but from whose Milanese period – the most interesting – scarcely anything remains. We presented six tondi from his Terzago Polyptych of 1363. There was also a cassone front by Bartolo di Fredi, which is as far as we know the earliest surviving historiated Sienese panel of this kind, with the marvellous story of Tristan and Isolde.

Venice was represented by an unpublished panel by Paolo Veneziano. Another Trecento work was the small Presentation in the Temple by Bernardo Daddi, part of the same ensemble as the Nativity in the Museum of Fine Arts, Boston, with its sense of colour and lyricism, showing what a startling storyteller this famous painter was.

The advent of the next century was marked by upheavals of all kinds: the investigation of perspective, the study of portraiture, the obsession with Antiquity and a study of statuary that allowed Mantegna and the Paduan School to convey volume through painting, while drawing inspiration from the refined decorations of the Sienese tradition, contributions from neighbouring areas and the enduring influence of the International Gothic. In this context we exhibited the following works:

– the three panels by Giovanni da Rimini (catalogue p. 210); and

– the Christ at the Column by Liberale da Verona (catalogue p. 244).

In conclusion, the exhibition allowed visitors to see works by the two greatest Sienese painters of the 15th century side by side: Sassetta, geared to modernity and an unpublished Giovanni di Paolo, turned towards tradition. 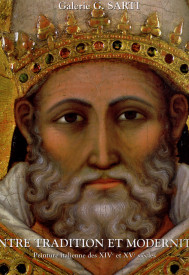 Catalogue out of print