This new ensemble of twenty-three pictures included seven works from before 1400. One of these pictures, the Martyrdom of St. Lucy (catalogue p. 18), even dated from the middle of the 13th century, around 1250-1270.
The Burial of St. John the Baptist by Lorenzo Veneziano (catalogue p. 40), a discovery, has since rejoined in the Tours museum another element from the same predella.
The exhibition also featured a masterpiece by Agnolo Gaddi, the Virgin of Humility with six angels (catalogue p. 62) dating back to the end of the 14th century and contemporary to the famous frescoes telling the legend of the True Cross that he painted for Santa Croce in Florence.
The richness of the fabrics, the abundance and the preciousness of the details, the use of light and shade to create depth and the fluidity of the cloth, all announced the International Gothic style.
This new style was further represented in this exhibition by the exuberant decoration of Alvaro Pirez d’Evora’s Virgin of Humility (catalogue p. 78) with its magnificent gold ground engraved with foliage, in which all the lacquers are perfectly conserved.
Three masterpieces from this period were also brought to us by the town of Siena: two charming Virgin and Child by the painter known as the “Angelico of Siena”, Sano di Pietro (catalogue pp. 104 and 112), which took up the models of the great Sienese tradition, those of Lorenzotti and Simone Martini. And in a totally different register, the very first representation, so it seems, of an iconographic schema that was soon to have great success: the Ecce Homo painted by Giovanni di Paolo (catalogue p. 98).
But the discovery of the unpublished Virgin and Child surrounded by cherubim by Liberale da Verona (catalogue p. 124), an extremely rare picture by a painter who was above all a very talented miniaturist, was perhaps for us the most important event of this exhibition. Paul Klee said that “Art does not reproduce what is visible; it renders visible”; Liberale indeed allows us to see his imaginary world, a fantastical world, quasi surrealist, with his sense of scenography and his unleashed expressionism. 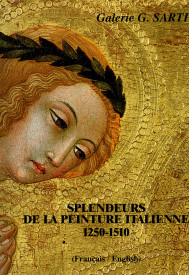