Thirty-Three Early Italian Paintings 1310 – 1500: from the Sacred to the Profane

This first exhibition held in our Paris gallery assembled thirty-three works ranging from 1310 to 1500, from the time of Cimabue to that of Botticelli. All of them belonged to the gallery and simply represented the current state of our acquisitions, since from year to year we have a fairly constant number of pictures from this period.

Those who were already connoisseurs of the period could discover some extremely rare painters such as the Master of San Torpé, Naddo Ceccarelli, Matteo Giovannetti and Nicola di Ulisse da Siena. For the less familiar, there was a broad panorama of works spread over two centuries, with a focus on major centres of artistic activity.

The random element of our purchases also allowed the exhibition to explore two essential movements in 14th and 15th century art:

– the art of Avignon, a relatively little-studied cultural phenomenon that saw the city become the seat of the papal court from 1309 to 1377, when Italian artists, uprooted and faced by a direct experience of French and Flemish art, invented a totally new style. Avignon became an international meeting place where painters could free themselves of their native traditions and adopt a daring new approach.

– the International Gothic style, principally represented by Gherardo Starnina and Lorenzo Monaco. Notably, the exhibition included three panels by Starnina, each of them a highly polished and refined work. 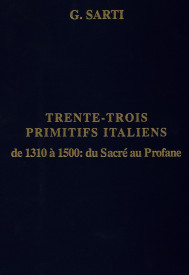