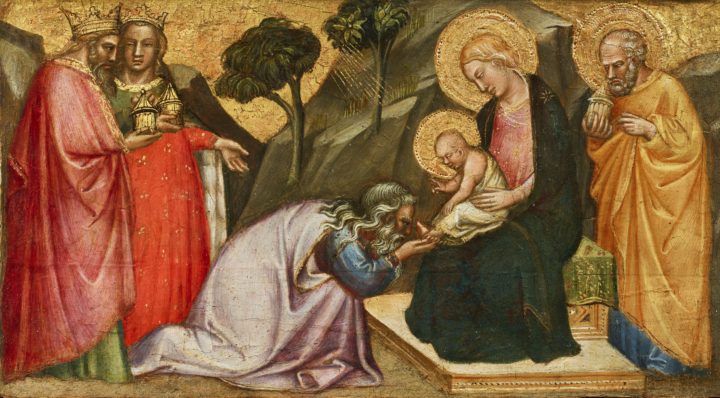 Recognised as by the hand of Spinello Aretino since Raimond van Marle published it in 1924, this excellently-preserved panel formed the lateral element of a predella with stories of Christ.

In the centre of the scene, the Virgin holds the Child, who is wrapped in a white mantle that reveals his left shoulder. Before him, the oldest of the three Magi kneels to kiss his little feet. Beyond them, in the background, a steep craggy slope rises, with two small trees and some scattered grass. In the foreground, on the left, the other two Magi, each wearing a golden crown, are in conversation as they wait to pay tribute to the Child. Behind the Virgin, Joseph observes the scene. With his right hand, Mary’s husband holds the small casket brought by the kneeling Magus, while with his left he lifts his ample yellow cloak, folded over his arm, which shows off the blue robe under it.

With respect to other depictions of the same subject by Spinello – for instance the predella panel in the Galleria Nazionale in Parma – our scene has a more essential approach to narration, enhancing the monumentality of the protagonists, who all reflect a solid neo-Giottesque character. Yet Spinello is not averse to subtle touches of refined details, visible here in the hems, adorned with mordant gilding, the stippling of the haloes, and the attentive description of the dais, which is embellished by painstaking inlaid wood decoration, which recurs in a very similar way on the Virgin’s throne, itself covered by a richly gilded green fabric. Spinello conveys the tender mood of the Virgin with a freshness and immediacy as she watches the Child, lively, smiling and almost amused as he blesses the kneeling King, draped in a bright, violet-tinged cloak.

In 1975 Miklós Boskovits associated the Adoration of the Magi and a Nativity, now in a private collection in Genoa,2 (enlever) identical in style and dimensions to our panel, indicating that they formed part of a single predella, of which Gaudenz Freuler later recognised the central section, a Lamentation over the Dead Christ. Freuler justly noted that this last scene included a literal citation of two figures drawn from the frescoes by Antonio Veneziano in the Camposanto in Pisa, painted between 1384 and 1386. Consequently, Spinello would have then painted this predella following his second sojourn in Pisa, where he himself had frescoed Stories of Saints Ephysius and Potitus in the Camposanto between 1390 and 1391.
The full and soft forms, as well as the free and vibrant handling confirm a dating shortly after the Pisan sojourn. Those characteristics are indeed typical of the painter’s maturity, as already evinced by the Sant’Andrea triptych in Lucca, dated in the same year, 1391, now housed in the Galleria dell’Accademia in Florence.
The swift brushstrokes describing the hair, white beards and eyebrows of Saint Joseph and the Magi recall also the flashing highlights of the frescoes in the Manetti chapel in the church of the Carmine in Florence. The face of the Virgin, modelled with subtle brushstrokes and warmed by a living, breathing rosiness, depicted in the slightest of three-quarter views, could be for example a sister of the profile figure of Salome from the fresco of Herod’s Feast once in the Carmine and now a detached fragment in the Walker Art Gallery, Liverpool. As in our panel, this cycle, datable to the early 1390s and only surviving in fragmentary form, has trailing draperies that imply the volumes of the bodies within them; this shows a more mature sensitivity to anatomy, revealing Spinello’s retrospective approach, inclined as he was to a passionate and studiously concealed rereading of the noblest antecedents of Florentine painting of the early Trecento, above all Taddeo Gaddi.

More recently, Stefan Weppelmann suggested connecting the predella of which our Adoration of the Magi formed part with the Virgin and Child with Saints and Angels in the Kress Study Collection at the Bucknell University Art Museum in Lewisburg (indeed its width is similar to that of the Lamentation in a private collection) and with an Annunciate Virgin in an unknown location with the same reconstruction, as a pinnacle panel.

Emanuele Zappasodi (extracts from his study)
(translated from Italian)