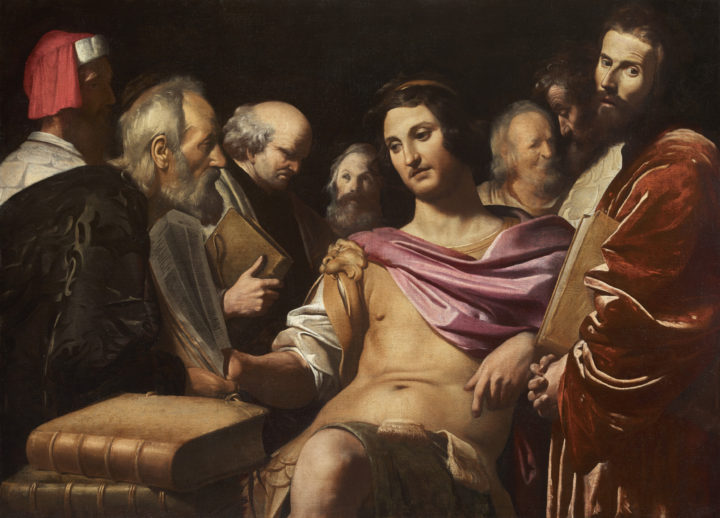 This painting represents a very rare subject. Ptolemy II, second sovereign of the Ptolemaic dynasty in Egypt (he reigned between c. 285 and 246 BC), decided to have the first five books of the Biblical Old Testament (the Pentateuch) translated from Hebrew into Greek, so as to enrich the collections of the Library he had just founded in Alexandria. Seventy-two (or seventy) learned Jews were appointed, six for every tribe of Israel, and they completed their work there in seventy-two days, each one independently, without comparing texts. In the end their translations were found to correspond, in a surprising manner. While this account has the ring of a legend constructed to give a charismatic value to the translation, the latter endures today as the liturgical version of the Old Testament in Eastern Orthodox churches of the Greek tradition.

In the composition before us, Ptolemy wears a thin leather cuirass, evoking his Greco- Macedonian origins, while the pink cloak falling from his shoulders is quite unusual. Surrounded by a group of Jewish scholars, the sovereign is shown examining one of the translations (other large volumes are stacked in the foreground, composing an admirable and powerful still life), brought to him by a bearded scholar whose profile reflects anxiety as his body stretches forward, waiting for royal assent. Ptolemy has a sort of headband in his hair, which we may recognize as the fascia eroica that appears in ancient busts of him; some of these show more than a passing resemblance, in particular the one from the Villa of the Papyri at Herculaneum, now in the Archaeological Museum in Naples, inv. no. 6158. The headband – evidently an emblem of royalty – appears as part of a bust of “Tolomeo con fascia legata in fronte con suo peduccio pavonazzo, e bianco, sopra un scabellone” recorded in the inventory of scupltures (1692-1704) of Cardinal Carlo Barberini, though this remains unidentified. Another statue in marble, this time full-length, was in the collection of Prince Livio Odescalchi (inventory of 29 November 1713) in the family palace in Piazza Santi Apostoli in Rome: “Re Tolomeo coronato di Fascia Eroica […] sopra un piedistallo di legno dorato”.

This newly-discovered canvas is not cited by documentary sources or biographers, and constitutes a beautiful and important addition to Spadarino’s catalogue; indeed its quality and stylistic features leave no doubt regarding authorship. The figures of the Jewish scholars would be enough to confirm it: the one on the left is tantamount to a signature, updating, so to speak, the figures of the Apostles in the Supper at Emmaus in Arrone, but above all that of the doctor on the right in the Christ Among the Doctors in the Palazzo Reale, Naples, and the Saint Martial in the Miracle of Saint Valerie, painted by Spadarino at the beginning of the 1630s. The resemblance to this last figure is so close that we might even suppose the same model posed for the artist. Another recurring figure in Spadarino’s oeuvre is the scholar standing on the right wearing a red cloak made of heavy velvet and furrowed by typical luminescent folds, with effects similar to those on the sleeve, reflected in the water, of the Narcissus in Palazzo Barberini, Rome, or the cushion on which Constantine kneels in the Baptism of Constantine in Colle Val d’Elsa. The latter seems to share its compositional structure with our picture, the scene closed off by a row of heads and figures in a kind of horror vacui. As in the painting in Colle Val d’Elsa, the figures here also form a seemingly impenetrable hemicycle (from which the three in the foreground stand out), blocking off the background, their heads impeding any break in the line. Particularly significant, too, is the recurrence of brocade, white on white, covering the shoulder of the figure in the middle ground on the right, and green on green, giving body to the cloak of the first figure in the left foreground. As one can clearly see, the patterns are similar to those in the doublet worn by the Barberini Narcissus.

One of the most remarkable elements of this new work is naturally the rarity of its subject, which suggests it was the result of a very intellectual and probably aristocratic commission. The presence of the statues in the Barberini and Odescalchi Collections could offer a clue for associating the execution of the painting with one of those patrons; in any event it seems entirely plausible that the painter could have seen such representations of the Egyptian sovereign. A further element of originality lies in the artist’s decision to depict the young ruler in a languid, contemplative pose (typical of so many figures in Spadarino’s oeuvre), with the cuirass like a corset adhering to his body as though he were naked, and the pink cloak enhancing – who knows how consciously, since pink has such precise symbolism today – his sensual ambiguity. As Spadarino’s paintings gradually come to light, we are increasingly struck by this painter’s marvellous originality, and by how he invents an iconography marked by a sense of revealed intimacy, steeped in a plush, soft sensuality of unfathomable ambiguity, which on occasion becomes more explicit and daring: suffice it to run through a group of images ranging from the Guardian Angel in Rieti, the Banquet of the Gods in the Uffizi, and the extraordinary Christ Displaying the Wound in His Side in the Perth Museum and Art Gallery, which has only recently entered the scholarly literature, to the Saint Francis Comforted by the Angel in the Koelliker Collection, which also emerged in 2006, the celebrated Narcissus, and now this new Ptolemy.

The comparisons we have established thus far provide evidence for dating, as does the maturity of brushwork, which has now become firmer and more substantial, with a determined and concise, albeit perfectly even, handling – the kind of painting that appears entirely impervious to ubiquitous Baroque modes, making Spadarino the most strenuous, quixotic defender of Caravaggesque naturalism (besides, among the so-called caravaggeschi, he was the sole such figure who lived on in Rome – dying in 1652 – bearing witness to such fidelity). We may therefore suggest that the canvas studied here was painted late in Spadarino’s career, during the 1630s.