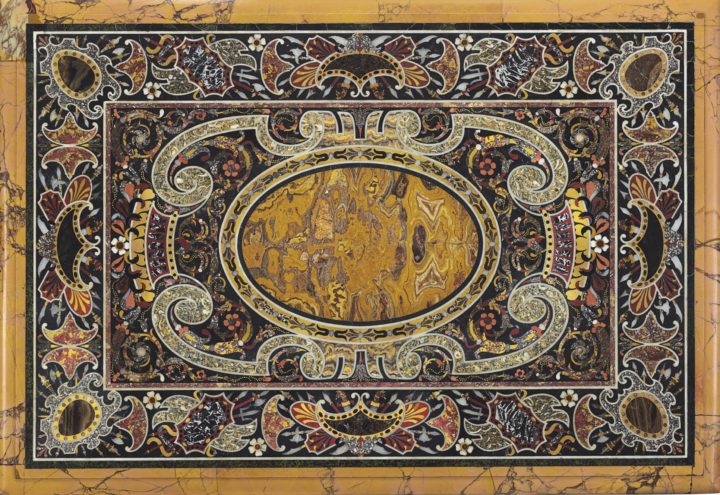 TABLE-TOP IN A MOSAIC OF COLOURED MARBLES
ATTRIBUTED TO PIETRO CARLI
Rome, c. 1580-1600

With a central oval of alabastro fiorito within a narrow border of stylized flowers, the inner field with bold volute scrolls of lumachella orientale interspersed with scrolling flowering stems and trailing beads, the ends with flower-filled baskets, the center of each main border with a pelta shield of breccia quintilina and military trophies, the weapons with blades of translucent alabaster, flanked by angled trophies and shields of bianco e nero antico, each corner with a cartouche-shaped trophy of alabastra a tartaruga and semesanto, within a narrow outer band of pietra nefritica and a moulded outer edge of giallo antico.

This spectacular inlaid marble top is an outstanding example of Roman commesso work from circa 1600. It displays a central oval of richly figured alabastro fiorito within bold volutes of lumachella orientale and lush flowering foliage, while the borders of military trophies are equally sumptuous, employing panels of rare and precious stones such as breccia quintilina and alabastra a tartaruga, so-called because it resembles the richly mottled effect of tortoiseshell. The rediscovery of this table top is particularly exciting as it can be attributed to a Florentine marble craftsman Pietro Carli, probably active in Rome at the end of the 16th century, on the basis of its close similarities to a signed example in All Souls College, Oxford.

Rare marbles and hardstones have been prized since antiquity and the extravagant display of coloured marbles was emblematic of the supreme power and prestige of ancient Rome. This rich tradition was kept alive through the elaborate mosaics of Byzantine architecture and the patterned use of marbles in the Middle Ages. The Renaissance fueled a renewed passion for the arts of ancient Rome, and enlightened connoisseurs were able to reuse the rare coloured marbles of which Rome was such a rich source. The art of commesso, which was revived in the 16th century, was a technique of inlaying various sections of differently coloured marbles and semi-precious stones to form a design and consciously imitated the mosaic-work and inlaid marble floors of ancient Rome known as opus sectile.

In Rome, commesso work was particularly associated with enlightened architects and designers such as Jacopo Vignola (1507-73), who provided the designs for the celebrated table supplied to Alessandro Farnese circa 1565, now in the Metropolitan Museum, New York, and Giovanni Antonio Dosio (1533-1609). Their work attracted the interest of wealthy, sophisticated patrons such as Cardinal Giovanni Rici of Montepulciano and Cosimo I Medici, whose fascination for the art of inlaying marbles led to the foundation of the celebrated Medici workshop by his son Ferdinando. In 1565 the Bishop of Viterbo, Sebastiano Gualterio, owned three inlaid marble tables, with centres of alabaster ‘… of brocatello white and black, greens, and other rare stones‘, which, although earlier, must have been broadly similar to the table top offered here (see A. Giusti, Pietre Dure Hardstone in Furniture and Decorations, London, 1992, p. 12).
The earliest versions of these table tops, produced in Rome in the middle of the 16th Century, would usually consist of a plain rectangular panel of a rare ancient stone, usually a form of alabaster, within relatively plain geometric borders. Interestingly, a 1568 inventory of the Palazzo Farnese refers to table tops solely by recording them as panels of rare marbles, implying that the display of the central panel of a single stone was their primary purpose. The distinctive pelta-shields of the borders of the Farnese table are clearly echoed in the border of our table top (see Giusti, op.cit., p. 10).
Later in the century, while retaining the basic scheme of a larger central panel and geometric borders, the designs of Roman table tops became more elaborate, with more naturalistic elements such as flowers and trailing foliage being introduced, often with distinctive beaded arabesques as on this table top. Examples of this group, include the following:
– One in the J. Paul Getty Museum Los Angeles, previously in the collection of Alfred de Rothschild, Halton, Buckinghamshire, and by descent to Edmund de Rothschild, Exbury, Hampshire (illustrated in C. Bremer-David, Decorative Arts An Illustrated Summary Catalogue of the Collections, Malibu, 1993, p. 189, cat. 320) ;
– One in the Villa Borghese, Rome (illustrated in Giusti, op. cit., p. 30) ;
– One in the Prado Museum, Madrid, first inventoried in the Royal Spanish collection in 1636 (illustrated in A. González-Palacios, Las Colecciones Reales Españolas de Mosaicos y Piedra Duras, Madrid, 2001, p. 65, cat. 3.

Our table top belongs to a select and distinct group of just before 1600 tables which are among the mostly richly ornamented of this period. They incorporate even more elaborate and figural designs to the borders, particularly in the form of eye-catching military trophies with the blades of the weapons inlaid in the same distinctive translucent alabaster as on this table. Our table top is remarkably close in design to an example in All Souls College, Oxford (illustrated here), which also features the same bold volutes framing the central oval, the distinctive flower-filled baskets to either end of the main field and an outer edge of giallo antico. The All Souls table top has the rare feature of being signed in its outer border ‘M.PIETRO CARLI FIO[RENTINO] FECIT’ and was formerly acquired by either Alfred or James Morrison for their celebrated collection at Fonthill, before being sold at auction in 1936 (see A.M. Giusti, Pietre Dure and the Art of Florentine Inlay, London, 2005, p. 38, fig. 27 and p. 42; and S. Swynfen Jervis and D. Dodd, Roman Splendour, English Arcadia, London, 2015, p. 45, fig. 50).
Such are the similarities in design and choice of marbles in these two marble tops that an attribution of our table top to Pietro Carli is also feasible. Tantalisingly, very little is known of this marble craftsman, although a bill from 1569 for a table top being prepared for Ferdinando I de Medici records ‘Pietro detto el Fiorentino’ as being responsible for its creation, which could refer to the same maker. The fact that he is clearly of Florentine origin raises some interesting questions, as this group of marble tops is traditionally thought to have been made in Rome, and Florentine work of the period is most closely associated with the Medici workshops, which had a quite different, distinctively naturalistic style with a more pronounced use of hardstones (as opposed to marbles) on a black ground.