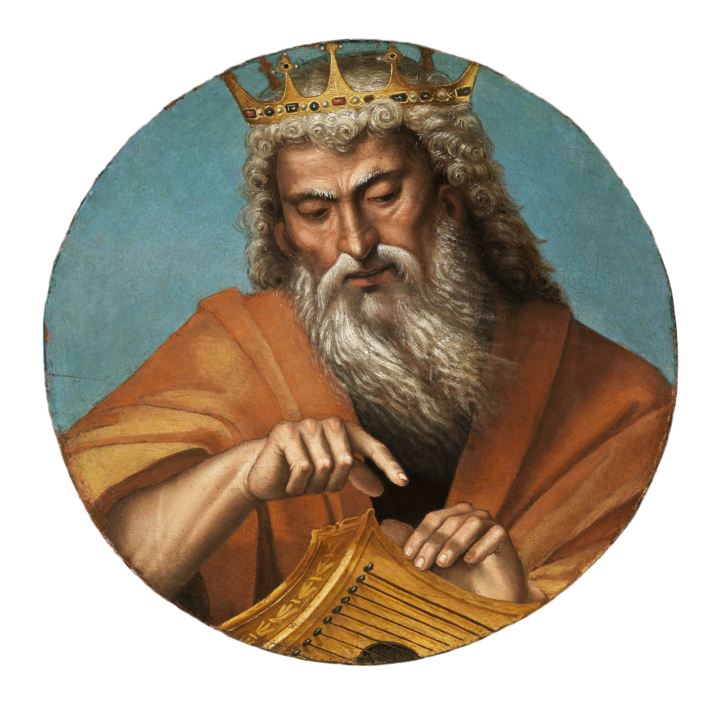 This roundel of King David, identifiable by his traditional attributes of crown and harp, is described di sotto in sù, implying a low viewing position, in slight contrapposto, and with his face turning downwards and to the right. Subtly attentive light falls from the other side. The palms of his hands are carefully backlit, and his mouth is crossed by a transient, indefinite penumbra. White highlights move swiftly across surfaces, touching the forearm and wrist, shown in gentle torsion; the tuning pins and strings of the harp project shadows onto the instrument’s soundbox, and its shoulder is decorated with an inlaid wood pattern.

The figure’s penetrating gaze emanates a potent psychological energy that immediately evokes the figure types used by Luca Signorelli in his mature years. The severe expression of this David resembles those of the figures in the Stories of Saint Benedict in the cloister of the Monastery of Monte Oliveto Maggiore. Thus the features of the old bearded man in the middle ground of Saint Benedict evangelising the inhabitants of Montecassino – furrowed brow, round-pointed nose, deep-set eyes, and long-lipped mouth – are not far from our David, who is also akin to the Benedictine monk next to the saint in the episode of Benedict reproaching the brother of Fra Valeriano for having broken his fast. In the fresco of Saint Benedict discovering Totila’s deceit, the resemblances between David and the white- haired man behind the King are even stronger: half-closed eyes, ruddy cheeks, bushy eyebrows made grey by swift white brushstrokes, and a soft beard, flowing sinuously over the lips. With respect to the good-natured character of the old man in the Olivetan fresco, our David shows more severity – not a common trait in Signorelli – and is thus closer to the more corrosive emotions of figures at Monte Oliveto, such as the armed men and the older bearded characters in Totila’s retinue.

Signorelli’s style is also evident in the drapery, defined by broken folds and broad planes of modelling, and in the confident draughtsmanship, revealed under the painting by traces of spolvero (pouncing). Such splintering of drapery is typical of the painter’s maturity, as is the modulation of tone from orange to acid yellow.

The olive-skinned Prophet, modelled with deep chiaroscuro but enlivened by vibrant touches of light on his skin, is very close to the ashen body of Christ in the Lamentation in the Diocesan Museum in Cortona, which also resembles our painting in the free, swift brushstrokes used to describe hair. In this masterpiece of Signorelli’s maturity, painted in 1502 for the high altar of the church of Santa Margherita, the slightly dry substance of the paint surface is truly the same as that of our tondo.3 Furthermore, the knotty hands of David, highlighted on the knuckles and fingers, recall those of the centrally-placed Saint John the Evangelista in the Cortona panel, even though his hands are leaner.

Yet compared to the smooth, compact surfaces habitually found in Signorelli, the pigment in our David has more body, especially in the hair and beard of the Prophet, which seems made of unravelled, soft cotton wool, unusual for the artist. This aspect should not disorient us or lead us away from the picture’s correct authorship, because on closer inspection it is not unique in his oeuvre. A similarly rich impasto appears in the heads of grey hair in the dismembered Matelica Lamentation – its fragments now in a British private collection, a Genoese collection, the Unicredit Bank in Rome, the National Gallery in London, the National Gallery of Art in Washington, and the Museo Civico in Bologna – and the Martyrdom of Saint Sebastian in the Picture Gallery in Città di Castello. With respect to this second painting, executed in 1498 for the family chapel of Tommaso Brozzi in the church of San Domenico, a work full of pentimenti and swift handling, recent scholarship has underlined technical peculiarities not common in Signorelli’s catalogue, but which, if assessed as they should be, can contribute to a reshaping of the often overly monolithic image of his mature phase – thus the metallic shine of the curls in the martyr’s slightly disordered hair, and his open, full-lipped mouth, revealing his teeth like our David. A more substantial use of pigment, with a strikingly pictorial effect, is also found in certain passages in the proscenium of the Baptism in Arcevia, especially in the transparency of the water moving around Christ’s legs, as well as in the predella panels with Scenes from the Passion in the Lindenau Museum, Altenburg, where surfaces become less polished, form begins to dissolve, and expressions turn serious, like those disturbing the mind of our David.

Since Mario Salmi wrote about the Altenburg predella, some scholars have sought to identify the collaboration of Signorelli’s pupil Girolamo Genga. However, it is hard to trace Genga’s hand with certainty, especially, if as Laurence Kanter proposed, these panels relate to the Filippini altarpiece, painted for San Francesco in Arcevia in 1508, rather than an earlier dating, close to the Cortona Lamentation of 1502, as was believed in the past. In fact, in 1508, Genga renewed his collaboration with Signorelli, working on the decoration of the palazzo of Pandolfo Petrucci in Siena and speaking a precise language that cannot be so clearly perceived in the Altenburg panels, though it had announced itself in about 1505 in the Martyrdom of Saint Sebastian in the Uffizi Gallery. The latter reveals a complex idiom, structured after Signorelli but now looking towards Perugino and the young Raphael, and not unaware of the Saturnine moods of Piero di Cosimo and Filippino Lippi. For the “Camera bella” in the Palazzo Petrucci, Signorelli, who had undertaken the commission together with Pinturicchio, painted four episodes of which only two survive (the Reconciliation of Coriolanus and the Triumph of Chastity; London, National Gallery), and involved Genga, entrusting him with the scenes of Fabius Maximus ransoming Roman prisoners from Hannibal and Aeneas fleeing from Troy, now in the Pinacoteca Nazionale in Siena. Our David appears to reflect this climate of renewed Sienese collaboration, showing undeniable parallels with the hirsute profiles of the men in Genga’s frescoes, but without sharing the delicate Perugino-inspired description of flesh.

Signorelli’s authorship can be perceived in the high quality of this David, with moral fortitude conveyed by the powerful facial features of the prophet, and refined passages of light, rendered with a subtleness unknown – except in Genga – among all the immediate followers of the great Cortonese master. Signorelli was stigmatised in a caustic and provocative manner by Kenneth Clark, according to whom “of all great masters, Signorelli seems to have had the most idiotic pupils”. Certainly the subtle quality of our tondo is unrivalled if one compares it either with the works of Luca’s nebulous nephew, Francesco Signorelli, an enduringly mediocre painter, or with the dry, wooden pictures assembled around the Virgin and Child with Saints dated 1492 of the Cathedral Museum in Città di Castello, signed by a certain Giovanni Battista, identified in the past as “il Fantastico”, or indeed with works by Papacello, a younger painter who was immediately drawn to the Roman scene, at that time dominated by Raphael.

The panel has retained its original dimensions, as proved by the presence of the gesso beard running along the whole margin of the panel. There, under the painted surface, one can observe traces of the gold from the frame, originally unified with the support and thus gessoed and gilded before the artist applied his brush. In this period, paintings in an independent circular format were widespread, but customarily represented Marian subjects.

The work must therefore have come from a fairly complex structure, and probably adorned one of the spandrels or part of the upper register of a grandly-designed, classicizing altarpiece of the kind found in Umbria and Tuscany in those years, one intact and well-preserved example of which is the Santa Maria dei Fossi altarpiece by Pinturicchio in the Galleria Nazionale dell’Umbria. Similar structures can also be found in marble altarpieces, which are generally better preserved, such as the altar of the Mastrogiudici Chapel, carved in 1489 by Benedetto da Maiano for Sant’Anna dei Lombardi, or the Crucifixion altar of 1493 by Andrea Ferrucci in San Girolamo, Fiesole, now in the Victoria and Albert Museum, London. The accentuated di sotto in sù depiction of our David, and his leaning out beyond the frame to indicate whatever is painted in the central register, below, corresponds well to such a destination.
Nonetheless, this painting could also have decorated a capsa, a more or less autonomous structure built as protection for a large macchina d’altare, now very difficult to document because such items were programmatically dismantled after the new liturgical demands that emerged from Council of Trent. It is worth noting that that four tondi with depictions of the Evangelists by Eusebio da San Giorgio probably decorated the squinches of the capsa made to protect the enormous double-sided altarpiece painted by Perugino for the high altar of Sant’Agostino in Perugia, decorated in its own turn in the volutes of the gable with oculi representing Prophets. Finally, Perugino’s Prophets Jeremiah and Isaiah in the Musée des Beaux-Arts in Nantes no doubt came from the outer shutters of another capsa, made for the high altar of the church of San Pietro in Perugia. The placement of Signorelli’s David on the outer side of a capsa could explain the less polished, compact character of the paint, and the unusually dense impasto, rich in pigment.