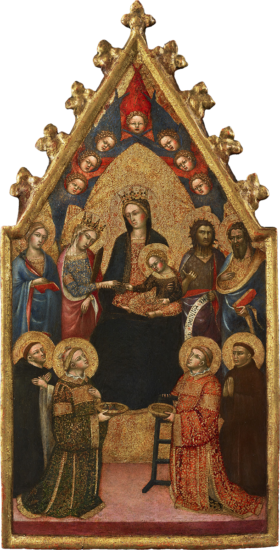 Mystic Marriage of Saint Catherine with Saints, Cherubim and Seraphim.
Circa 1410–1415.

This panel of extreme elegance represents the Mystic Marriage of Saint Catherine of Alexandria with Saints, Cherubim and Seraphim. Catherine stands in the place of honour on the Virgin’s right and holds out her hand to the Child, seated on his mother’s lap and about to place the ring on her finger. Behind the Virgin there is a sumptuous cloth of honour, subtly stippled and surmounted by an arc of blue cherubim and red seraphim. John the Baptist holds a scroll bearing the inscription [ECC]E AGNIUS [sic] DEI and indicates the Child with his thumb, repeating a familiar gesture much favoured by the Lorenzetti. He is flanked on the far right by another male saint. Kneeling in the foreground, respectively on the outer left and right of the composition, are saints Dominic and Francis of Assisi. They are flanked, closer to the middle of the picture, by two deacon saints, Stephen and Lawrence, each prominently holding the symbol of his martyrdom and robed in sumptuous dalmatics.

This Mystic Marriage of Saint Catherine was painted by the young Gregorio di Cecco, a rare and still mysterious painter, of whom we know one signed polyptych dated 1423 and realised for the Tolomei family chapel in the Duomo of Siena. The youthful period of this artist is elusive, but we know he was a pupil, collaborator and adoptive son of Taddeo di Bartolo, a central figure of the artistic scene in Siena between the 14th and the 15th c.

The refinement of the gold work, the delicate and profound palette as well as the elegance of the drawing place our painting in the very midst of the Simone Martini revival around the year 1400.

The preciousness of our panel comes from Gregorio di Cecco’s particular attention to details (as the highlights in the hair, the transparency of St Catherine’s veil or the crown held in the Child’s hand) but, as well, from the different kind of technique he uses. The sgraffito, applied to the Cherubs wings, consist of using a metallic tip to scratch the painted surface and let the gold appear underneath.  For the other figures, like the two kneeling saints at the center of the panel, the artist covers the panel with gold leaf which is incised and embellished with minuscule punchmarks: this is the granitura. The faces, hands and dresses are then realised with translucent lacquers.

This sophisticated and extremely virtuoso handling make Gregorio di Cecco a figure of great interest in early fifteenth-century Siena, memorable time when the leaders of the younger generation like Sassetta and the Master of the Osservanza (Sano di Pietro) were developing the deeply-rooted Trecento language into a more modern idiom.