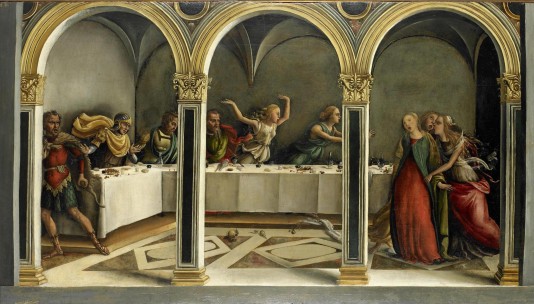 A panel of this size and with such an obvious narrative purpose is without a doubt a spalliera, that is, a panel which together with others of the same dimensions depicting various episodes of a story was used to decorate the walls of a bedroom in a patrician home. The name spalliera comes from the fact that the series of paintings was set into the boiserie at shoulder-height, and as Leon Battista Alberti says in De re aedificatoria, served to stabilize the temperature in the room. We also know from Vasari that “the most excellent painters engaged in this type of work”. In fact there is a long list of famous artists, from Pollaiolo to Botticelli, from Filippino Lippi to Pontormo, who undertook this type of commission; in fact the costs presupposed a clientele – the VIPs, the nobles and richest merchants of the period – who would not settle for a mediocre “product”.

The spalliere served not only to decorate and stabilize the temperature of the room, they also had an educational purpose. According to Vasari the subjects were “mainly tales taken from Ovid and other poets, or stories told by the Greek or Latin historians, as well as hunts, jousts, tales of love and similar themes”. They exalted the harmony of family life, the strictness of customs, a wife’s obedience to her spouse and so forth, so that whoever lived in rooms decorated with spalliere constantly, and literally, had the examples before their eyes.

When the panels were in sequence, they clearly told a story, however, the dismemberment or breakup of a cycle can make each panel an enigma that is difficult to decipher. This is definitely the case for this spalliera and its mysterious subject. We see a drama unfold with confusion and fear during a banquet. The crockery is overturned or on the floor, the guests are upset and look at the woman on the right who seems about to fall into a faint and is supported by the two girls who rush to her side. The soldier, wearing helmet and armour, at the head of the table, gestures with his hand at the sinister, seemingly angry character who seems about to flee the scene.

The apparently obscure subject of the scene justifies the generic title “Scenes of Hercules”, under which it was first published with Everett Fahy’s correct attribution to the Master of Santo Spirito. However, although the figure on the left, like Hercules, is wearing a lion skin, not a single episode in the legend of the hero corresponds to what we see in this painting.

For similar reasons of discrepancy with written sources, at first sight it may be difficult to accept that the distraught woman on the right is the Roman heroine, Lucretia, as she tells her husband Collatinus, who had been fighting in the siege of Ardea, about the rape by Tarquinius Superbus – in this case the suspicious figure in the lion skin cloak. In any event, the episode narrated by Livy, by Ovid and then by Boccaccio in De mulieribus claris, never takes place in the way it is illustrated in the Sarti panel. Indeed, after the violence Lucretia remains at home in desperation and sends her maids to summon her father and husband so that she could tell them what happened and announce her plans to commit suicide.

The version of the story we see here actually comes from Novella 43 of the Novelliere by Giovanni Sercambi (1375), in which the intimate human drama of Lucretia writing to her father and to her husband is replaced by the magnificent coup de theâtre in which the heroine bursts into the room where a banquet, with all the characters, is taking place. There are Collatinus, Brutus, and Tarquinius Superbus, who is chased away after having been found guilty (and this explains the gesture of Brutus, the figure in armour at the head of the table, who, with his hand, orders the rapist out of the room). This is not the only example of Sercambi’s texte being illustrated in Florentine painting: it is more romanticized and more suited to portrayal – and therefore was preferred by several artists. We can see it in the spalliera by Jacopo del Sellajo in Dublin (National Gallery) or another by the Master of Marradi that was formerly in the Katz collection in London.

In more recent times the desire to make the subject more comprehensible led to modifications on our spalliera, adapting it to fit the “Lucretia” thesis, as we can see from an old photograph of the painting in the Witt Lbrary in London that was brought to our attention by Everett Fahy. When the picture was taken, probably before the 1960s, a dagger had been added to the breast of Lucretia, and was poorly balanced on the heroine’s chest. A fragment of an early painting of a scene that could make one think of Tarquinius returning to, or leaving, the scene of his infamous deed had been added to the right side of the panel. This fragment, that was subsequently removed from the Sarti panel, was published by Luigi Grassi in 1964 with an attribution to Jacopo Ripanda. This attribution is no longer sustainable, even though the “antique style” reliefs on the spiral column do indeed harmonize with the Bolognese painter’s interest in this field. The painting seems to have been done by the same hand as the spalliera, although it is difficult to explain how it could be part of the same decorative cycle given the differences in the setting and the fanciful antique-style pretences. There is not a single link with the banquet scene and its coherent fifteenth century architecture: in the fragment published by Grassi, the spiral column – with its hodgepodge of antique-style motifs– is surprisingly positioned against a stately Corinthian column which, without a stylobate, stands in the middle of a beautiful lawn, while the crenellated walls, with large cylindrical towers, of a decidedly Medieval city rise on the hill in the background. We cannot take a stand as to whether it is an improbable rendering of Rome, or perhaps Ardea, the town Collantinus was besieging. What is certain, however, is that the scene totally lacks the beautiful architectural coherency of the Paris spalliera.

The identification of the Sarti painting with a story of Lucretia has led to a link with another painting by the Master of Santo Spirito that was formerly in the Castiglioni collection in Vienna, and portrays Tarquinius surprising Lucretia in her bed. The poses of the two figures do not perfectly fit the story that is one of rape – the aggressive gestures of Tarquinius and the victim’s chaste defense are clearly lacking. Aside from these ambiguities of tone in the rendering (perhaps with the artist’s mischievous intent) we are struck by the monumentality of the setting, a patrician palazzo of stately proportions, lavishly decorated with a surprising varietas that clearly contrasts with the relative simplicity of the loggia of the interrupted banquet in the Sarti painting. Here the cross vaults terminate on bare walls, the Corinthian pillars have simple panels without the candelabra reliefs that we see on the pillars in the painting which had been in the Castiglioni collection. If there is no doubt that both pictures were painted by the same artist, their relationship in a single decorative cycle could be accepted only if we presuppose that they were on different walls of the same room, and this could explain the difference in the nature of the two settings.

Today, the Sarti panel is free of all the repainting that forced the iconographic interpretation, whereas the stylistic features definitely place it in the catalogue of the Master of Santo Spirito – the pseudonym of the brothers, Donnino and Agnolo di Domenico del Mazziere. Most probably the author of our painting was Donnino, the younger, more evolved and freer of the two. He was so respected by his contemporaries that Francesco Granacci recommended him to Michelangelo as a helper for his work on the Sistine Chapel. According to Anna Padoa Rizzo, Donnino painted the central panel and the predella of the altarpiece with the Virgin Enthroned between Saint Bartholomew and Saint Anthony Abbot, now in the Pinacoteca di Volterra (datable around the end of the first decade of the sixteenth century), that presents more than one point for comparison with our banquet scene. For example, the artist used the same drawing for the Saint Anthony on the right side of the predella and for the figure of Tarquinius – the one with the lion skin – in the Sarti panel, most likely painted during the same period. The latter’s angry face, furthermore, is surprisingly similar to the grotesque masks on the bases of the vases that adorn the architecture of the Volterra altarpiece, and the same can be said for the seated guest just behind the second pillar from the left. The way of drawing the beards – and even more so the locks of hair, free, electric and flowing on the shoulders – is identical to what we can see on the artist’s more monumental works such as the Volterra altarpiece (see the head of the Virgin and the angels) or in the fragment with a Saint that was up for sale at Christie’s in London, or in the two Saints in the Ashmolean Museum at Oxford.

In the Sarti panel we may be surprised by the curiously similar expressions of astonishment or grief conveyed mainly by the half-open mouths and the upturned eyes. This was typical in an era when emotions and feelings were expressed primarily through gestures and the dramatic effects, given the purpose of these paintings, derived from the sequence of the story and the rhythm of the scenes. However, it is to these highly typified and emphatic symbols that the panel owes its dramatic strength and intense psychological impact.