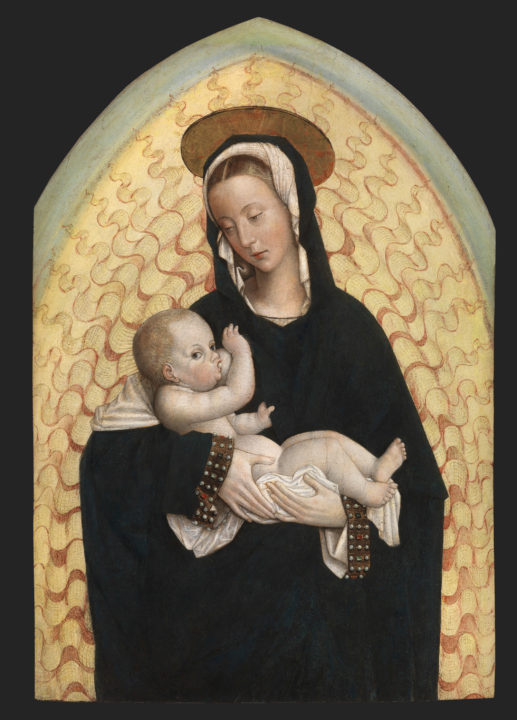 This is a depiction of the Virgin Mary breast-feeding the Christ Child, who is shown gently kicking his legs as he lies cradled in his mother’s arms, his head slightly turned and his gaze directed at the beholder; his cheeks, hands and plump little feet have the rosy freshness of an infant’s flesh. Set against a flaming mandorla, the Virgin is cloaked in ample drapery, its original deep blue tonality altered by time but preserved here and there under the darkened surface of the mantle. Her dress is enlivened by wide cuffs that adorn her broad, open sleeves, typical of Ferrari, with a geometrical fragmentation that recalls the prints of Martin Schongauer, a quality apparent since the time of our artist’s youth, when his painting seems indistinguishable from the oeuvre of Martino Spanzotti, as in the Christ Among the Doctors in the Museo Civico at Palazzo Madama, Turin, formerly in the Fontana collection.

The awareness of Northern European art, both Flemish and German, often found in Defendente’s oeuvre, especially in the middle years of his career, and defined by saturated, polished colours, reflects the enduring and seductive impact that Rogier van der Weyden and Antoine de Lonhy could still have, even at this late date, on painting in Turin. Such influence can easily be noted in our panel, too, both in the detailed attention to the warp and weft textures of the gold thread in the cuffs and in the minute description of the reflection and sparkle of the pearls, aquamarines, corundums, rubies and sapphires. Light runs along the indentation of the white fabric that surrounds the Child’s body in a prefiguration of his burial shroud, gently caresses the backs of Mary’s hands and their slender, elongated fingers, lends languor to her gaze, gilds her hair below the white veil and its richly-adorned hem, and glitters on the Child’s metallic locks.

Well known to scholars, the work was illustrated with the correct attribution in the sale catalogue of the important collection of Han Coray at Erlenbach, in Switzerland, where it was recorded by Bernard Berenson. It was auctioned on 1 October 1930 at Wertheim in Berlin and then entered the collection of Robert Abt before being auctioned once again in September 1942 in the Grosse Kunstauktion at Fischer in Lucerne. Its subsequent appearance in the Foresti collection in Milan is implied by annotations on the back of the panel and on the bottom of two photographs of the work, both housed in Florence, in the photographic archives of the Kunsthistorisches Institut (no. 102531) and the Fondazione Roberto Longhi at the Villa Il Tasso, respectively.

The subject of the Virgo Lactans was much favoured in Piedmontese painting of the first half of the sixteenth century, largely owing to the popularity of the Virgin and Child in the central panel of the Polittico dei Calzolai, the altarpiece painted by the Spanzotti workshop for the shoemakers’ chapel dedicated to Saints Orso, Crispin and Crispinian in Turin Cathedral Together with the altarpiece for the Consorzia di San Giovanni Battista (the brotherhood of Saint John the Baptist) – documented in a commission to Spanzotti himself – this work takes us straight to the heart of the questions raised by the elusive appearance of the young Defendente in the workshop of the older painter, and relating to the series of paintings belonging to the so-called Contini-Fontana group, all marked by a clear accent of Spanzotti’s idiom but not directly attributable to the master because of their more accentuated linear qualities and the milder psychological mood of the main figures. These aspects make them ideal starting-points for Ferrari’s career, heralding recurring elements of his future output, defined from 1509 onwards by securely-documented autograph works.

The Polittico dei Calzolai marks the initial moment of this dual collaboration, and is datable to an early period, most likely between 1498, when the renovation of the Duomo in Turin was completed, and 1500, the year Spanzotti returned to Casale, and before he settled in 1502 in Chivasso, Defendente’s native town.

The Madonna in the Turin polyptych was replicated several times by immediate followers of Spanzotti: suffice it to mention the young Giovenone in the Sacra Conversazione in the Johnson Collection of the Philadelphia Museum of Art, or Defendente himself in some of the works he painted for private devotion, such as the panel formerly in the Fontana collection and now in the Palazzo Madama. Outstanding among these for its high quality is the Virgin and Child in the Contini-Bonacossi Collection of the Uffizi Gallery, with the variant composition of the Child turned towards his Mother, inspired by Dürer and defined by a more elaborate taste for dress, achieved through a profusion of gold and a warmer, more saturated palette.

The finest outcome of Defendente’s meditation on the prototype by Spanzotti in Turin Cathedral – and we are still speaking of the first decade of the 1500s – is the central panel of the triptych now on the high altar of the Sacra di San Michele in the Val di Susa, in which the iconography of the Virgo Lactans is combined with that of the Woman of the Apocalypse (and of the Immaculate Conception) in which Mary stands against a golden Mandorla. It was precisely this superlative youthful exploit, both precocious and successful, that constitutes an illustrious precedent – as was recognized at the time by Luigi Mallé – for our panel and for the Virgin and Child in the National Gallery in Prague (inv. no. O11924), attributed to Ferrari by Olga Pujmanová, given its close relationship to the panel “formerly in the Coray Collection at Erlenbach”. The original format of our picture, cropped on all sides at some point in the past and given an arched top that follows the outline of the painted mandorla, can be intuited thanks to the signs left by two horizontal battens on the back of the panel, to which one can add a third which would have been near the bottom, matching the topmost one. This hypothetically larger size suggests that the work originally constituted the central panel of a polyptych resembling the one at San Michele, which also has a full-length Madonna “with the moon under her feet and on her head a crown of twelve stars”, as described in the New Testament (Revelation 12:1-2) and still partly visible around the edge of the strongly-foreshortened halo.

With respect to Defendente’s earlier treatments of the subject, our panel is marked by a distinct and far from banal touch of naturalism in the Child’s left hand, which lifts a fold of the Virgin’s mantle so as to reach her breast more easily. She is surrounded by the flaming red of the mandorla, now paler in parts, that seems to burn around her, changing into yellow, pale blue and aqua green and thus suggesting the effect of a fiery iridescent halo, certainly suited to an Apocalyptic context.

In our Virgin and Child the explicit Spanzottian elements of the panel in Prague yield to a certain softness in the flesh passages and an intense feeling for sentiment which is entirely characteristic of Defendente’s later work, produced in the years around 1530. These are works in which the palette glows more and handling becomes more polished, as in the altarpiece in the Walters Art Gallery, Baltimore, dated by Federico Zeri to the middle years of the painter’s career, the Virgin and Child and Saint Anne in the Rijksmuseum, Amsterdam, signed and dated 1528, and the Virgin and Child with Saints Crispin and Crispinian in San Giovanni in Avigliana, from well into the 1530s. Comparable to this last work is the Virgin and Child between Saints Lawrence and Michael, also at San Michele, painted by Defendente at the end of the 1520s and truly close to the Madonna in our panel, with which it shares the tone of reverie in that tilted head, and the languid, sorrowful gaze. Yet the picture before us transmits a greater chromatic freshness and a more refined handling of ornament, as we can see in the gold decoration on the hem of the Virgin’s white veil, which twirls around her temple and releases a lock of her soft, scarcely tangible hair, made even fairer by the warm light.