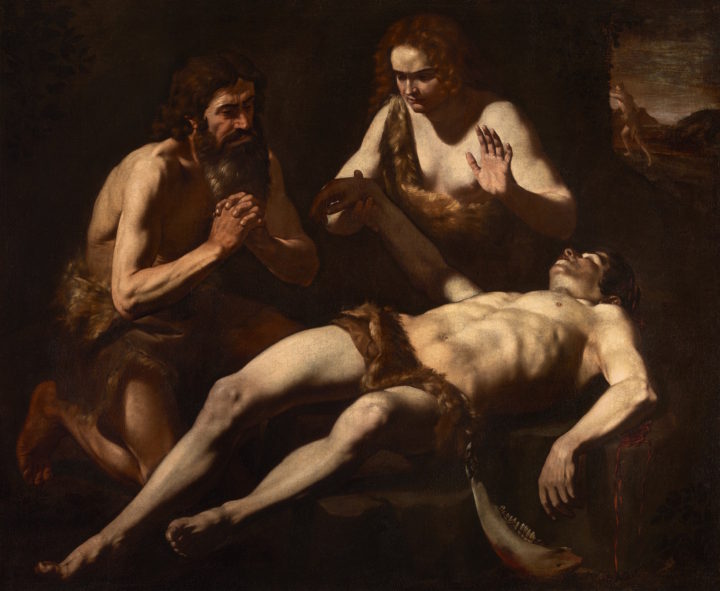 The subject of Adam and Eve Mourning the Death of Abel is rare, though it occurs more frequently in Neapolitan, Spanish and Emilian painting of the early Baroque period. In 1987 Giuseppe De Vito compiled a repertory of a number of paintings with this theme, from these schools (Ricerche sul ’600 napoletano, 1987, figs. 32-41).

A composition of 1604 by Abraham Bloemaert, engraved by Jan Saenredam, probably also influenced Italian versions of the subject (M. Roethlisberger, Abraham Bloemaert and his sons. Paintings and prints, Doornspijk 1993, fig. 132, cat. 77). Two Neapolitan painters in particular treated it in a distinctive manner, Battistello Caracciolo and Filippo Vitale (1589/90-1650), the latter Caracciolo’s junior by about ten years.

The composition presented here is a typical and beautiful work by Caracciolo. It was known to scholars in this field through reproductions published by Maurizio Marini in 1974 (with incorrect dimensions), but had only been seen at first hand by a few art historians, including the present writer.

The monumental group of figures in the foreground, consisting of the first parents lamenting the death of their son Abel is balanced by the silhouette of Cain, shown fleeing in desperation in the far distance. Abel is presented as an image of downed strength, his powerful body described in oblique foreshortening so as to make it more imposing. The scene is violently lit from the left, with light only hitting the figures and leaving the rest of the scene plunged in shadow. The chiaroscuro thus gives a dynamic impetus and precise outlines to figures and forms. The realistic faces of Adam and Eve are truly portrait-like. The movements of Adam and Eve, all but naked like their dead son, become almost frozen, and yet – seen by the viewer from below, in this virtually monochrome approach, and with an extreme simplicity of expression – their pain imposes itself with limitless energy.

Another version of the composition, attributed to Caracciolo, is in the Museo di Capodimonte in Naples, with larger dimensions (181 x 211 cm). This was identified by Nicola Spinosa (Ajaccio 2003) and Stefano Causa (Naples 2008) as the painting mentioned earlier described by De Dominici in the eighteenth century in the collection of the Duke of Laurenzano, but it is clear today that we cannot tell which version – the Capodimonte canvas or the one presented here – was really seen by De Dominici.

This canvas was certainly painted before the date generally proposed (that is, the mid or later 1620s). The dramatic chiaroscuro, bronze flesh tones, and “wilden Angesichter” (“wild expressions”, as Joachim von Sandrart would say in defining the physiognomy of Ribera’s old men) are enough to establish close ties with Ribera, who had just arrived in Naples and settled there in 1616. The date of our painting must therefore be situated in the second half of the 1610s, roughly between 1616 and 1620. Within Caracciolo’s oeuvre, the Madonna d’Ognissanti in Stilo (Calabria), a documented work of 1619, offers an excellent parallel: one need only compare the figure of the dead Abel with the stylistically identical figure in the extreme left foreground in the Stilo altarpiece.

Gianni Papi offers a very similar analysis of the painting, from which we cite the following excerpts:

[…] This beautiful painting, which has only recently once again come to light, has a substantial scholarly literature. It was first published by Maurizio Marini in 1974, when it was in a private collection in Rome, with the correct attribution to Battistello Caracciolo but with a notable error in dimensions (117.4 x 143.5 instead of 144 x 178 cm). […] The purchase in 2000 by the Museo di Capodimonte in Naples of a second version of the Mourning gave rise to a certain amount of confusion, and one painting was taken for the other (in fact they were considered to be a single work), until the reappearance […] of the canvas discussed here definitively proved that it (the Marini version) could certainly not be confused with the one which had been at Capodimonte for over ten years – a work, moreover, that was altogether poorer and evidently different in certain passages. […]

Our painting is a work of high quality, in excellent condition, and – as far as this writer is concerned – it represents one of the finest creations of Caracciolo’s career, for its refined brushwork, the audacious foreshortening of Abel’s body, and above all the silent, palpable sense of sorrow that pervades the scene in a natural, sincere way that is relatively uncommon in the painter’s choice of iconography and realisations […]. It has a magnificent, extremely balanced arrangement of the scene, with a sense of restraint and composure, and the bright youth and beauty of Abel’s naked body in the foreground accentuates the raw manner of his death, and of his loss. […]

I would not be surprised, therefore, if the dating of this superb canvas […] were to fall close to such paintings as the Saint Onuphrius in the Galleria Nazionale d’Arte Antica in Rome, the Noli me tangere in the Museo Civico di Prato, or the Miracle of Saint Anthony of Padua painted for the church of San Giorgio dei Genovesi in Naples […] – that is, in the period between 1617 and 1619. […]