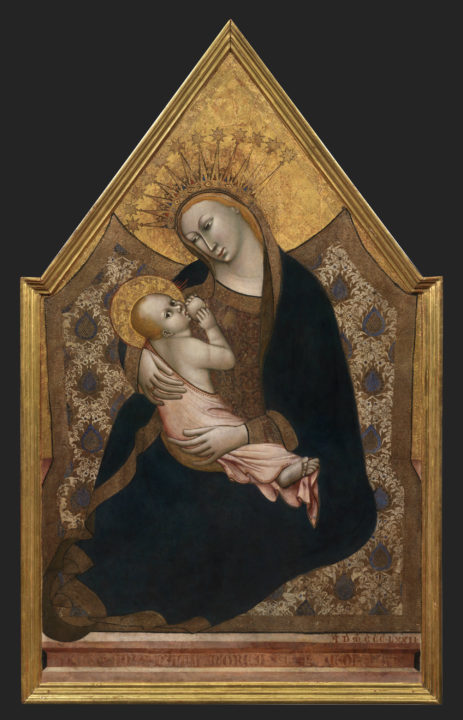 Inscription:
“A. D. M.CCC.L.XXII” at lower right, on the marble base; illegible fragments of a devotional invocation within the tablet below.

The iconography of the Virgin seated on the ground as a sign of humility – a theme whose familiarity was partly established by the fresco painted in about 1340 by Simone Martini in the lunette over the portal of Notre-Dame-des-Doms in Avignon – is here enhanced by that of the suckling Christ Child, following the model adopted in the Marches by Francescuccio Ghissi (Fabriano, San Domenico, 1359) and Allegretto Nuzi (San Severino, Pinacoteca, 1366). In the painting before us the image has a further degree of complexity: the Virgin is also represented as the Woman described by Saint John in his Book of Revelation: “a woman clothed with the sun, with the moon under her feet, and upon her head a crown of twelve stars” (Rev. 12:1). Her head, covered by a veil and blue cloak, is encircled by a crown with twelve star-tipped points, and below her, by her left foot, is a crescent moon. Another very similar painting, housed in the Museo Parrocchiale in Corridonia (Province of Macerata), contains an even more explicit association with the Apocalyptic text: the base of the throne bears the words “Mulier amicta sole et luna sub pedibus et in capite corona stellarum”.

Even if in our case the mutilated inscription on the base cannot be resolved in the same way, its authorship is clearly identical to that of the panel in Corridonia, which bears not only a date but the painter’s signature: “De Bononia natus Andrea [fuit hic ope]ratus A. D. MCCCLXXII”. As is known, this is one of the two paintings that enable us to reconstruct the activity of the Bolognese artist Andrea di Deolao de’ Bruni in the Marches, where he worked in places ranging from Ancona, where he is recorded as living in 1377, to nearby Osimo, the area of Macerata (Corridonia, Tolentino) and down to Fermo, which still houses his earliest signed and dated work, the polyptych of 1369 formerly in the church of the Benedictine monastery of Santa Caterina and now in the Pinacoteca Civica there.

The Sarti Madonna of Humility recently re-emerged on the art market after being auctioned seven decades ago (New York, Parke-Bernet, 24 May 1944, lot 78), unfortunately unaccompanied by any documentation that might help clarify its original setting. It has the same date (1372) and even iconography as the panel in Corridonia, and is thus invaluable for our knowledge of the kind of work in which Andrea da Bologna must have been specialized, to the extent that such an image was requested on more than one occasion. A third Madonna of Humility, its current whereabouts unknown, but a photograph of which was reproduced by Miklós Boskovits, offers a further example of such “specialization” as well as of the success of this iconography in Marchigian territory. This last work is an instance that stands on its own, since Andrea’s task was actually to repair a work by a local artist which had evidently been damaged: while another hand was responsible for the lower part of the picture with the Child being breastfed by his mother, who is seated on a cushion, Andrea painted the head of the Virgin on a separate panel; his manner is clearly recognizable. He even sought to imitate the decoration carried out along the margins by the preceding artist.

The work before us was heavily reworked at some point in the past, with repainting entirely covering the Virgin’s cloak in a clumsy attempt to lend greater movement to its folds. Recent conservation carried out in Florence by Stefano Scarpelli has given it renewed legibility, bringing out the azurite of the cloak and allowing us to fully appreciate the refined quality of the decoration, which as we shall say below is typical of the late phase of Andrea da Bologna’s career. Sadly the original frame is lost, having been removed at some unspecified period, and this reveals the raised gesso line that marked the edge of the gilded and painted surface that would have extended just under it.

With respect to the Sarti Madonna, the one in Corridonia, which still has its original frame, has slightly taller proportions: 175 x 92 cm. Nonetheless, the two images of the Virgin and Child would almost match if they were superimposed. The decorative motifs in the cloth of honour behind the Virgin are also very similar. In order to create these Andrea made use of a very elaborate technique, showing the painstaking quality of his artistry. To set off the cloth from the gold background, the cloth of honour was executed on “mezzo oro” leaf (a melding of gold and other metals, fairly widespread in Florence and Siena too), over which the painter has used punchmarks of various kinds so as to suggest a richly-embroidered border; the remaining part of the cloth is instead covered by a thick application of white pigment, which Andrea subsequently scratched through in patterns to reveal the underlying gold; these floral motifs provide the template for further ornamentation (“granatura”, or granulation) produced with the tip of a small punching tool. Large foliated pine-cones painted blue in the middle alternate with simpler foliate scrolls adorned with little buttons, also coloured blue. A rich range of punchmarks is also used for the Child’s cruciform halo, in pure gold, and for the hems of the Virgin’s dress. The same attention is given to her twelve-pointed crown, carefully raised with respect to the underlying halo, and made even more precious by red and blue geometric elements that give the impression of gems and precious stones. Instead of the big star surrounded by three rosettes in the Corridonia panel, Andrea has again used “granatura” to describe a large ten-petalled rose, at once alluding to the sun that clothes the Virgin in the scriptural passage, and to the Rosa mystica that constitutes one of the best-known titles used to invoke her.

Such skilled craftsmanship, fusing the painter’s work with that of a goldsmith, is combined with a no less surprising illusionism in the flesh passages, reflecting the lessons learned from Vitale da Bologna. The fact that Andrea de’ Bruni is documented in close connection with the latter in 1357, when he appeared as a witness to the sale of a house owned by Vitale, would lead one to believe that he was well aware of the master’s refinement in his last works: witness for example the small Virgin Sewing in the Museo Poldi Pezzoli in Milan, which it is worth recalling in this context, also because it is a very personal reworking of the theme of the Madonna of Humility, combined with that of the “Madonna operosa”. Also typical of Vitale is the lively demeanour of the Child, captured in his restless turning towards the beholder, nourishing himself on his mother’s milk as he avidly clutching her breast. Andrea’s work is also striking for other details, such as the Virgin’s hair emerging in the finest of ways from her veil and cloak. Beautifully arranged in the middle of her forehead, the blonde hair follows the oval of the face, once again echoing the style of Vitale.

However, with respect to Vitale, Andrea’s naturalism is less fantasioso and more conditioned by reality, and his chiaroscuro has a more smoky aspect. With these qualities he reaches a level very similar to that found in another disciple of Vitale’s, Simone di Filippo, known as “Simone dei Crocifissi”; a striking comparison, in this case, is that between the face of the Virgin in the Sarti picture and that of the well-known Madonna di Giovanni da Piacenza by Simone (Bologna, Pinacoteca Nazionale), which a document enables us to date to the year 1382. We should add that in his treatment of the same subject of the Madonna of Humility in a fresco still present in the church of San Martino in Bologna, Simone appears much less refined than his colleague Andrea.

The refinement of ornamentation makes the painting before us far more lavish than the altarpiece Andrea painted for Fermo in 1369. This depends on the distinct significance of the image, which in this case, as in the very similar panel in Corridonia, is almost that of a precious icon of the kind found in Eastern Christianity, in which painstaking description of form serves to stimulate enduring contemplation by its devout owner. It should also be noted that the intelligence of technical experimentation conveyed in these paintings is an important aspect of Andrea’s later work, thus foreshadowing the new late Gothic climate of the end of the fourteenth century and paving the way for Olivuccio di Ceccarello and then Gentile da Fabriano. It was indeed thanks to his privileged abilities that (as we learn from a payment of 8 April 1377) the Bolognese painter was employed in Rome to decorate nothing less than the cattedra, or great Papal Chair, of Gregory XI, who had just returned from Avignon: a task involving the joint accomplishment of painting and work in gold – just as we see in this picture – in order to achieve a level of extraordinary sumptuousness.