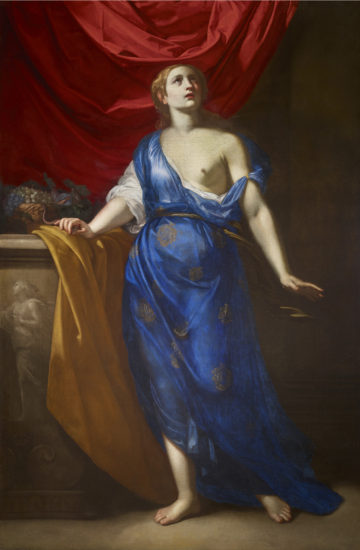 Cleopatra’s crowning moment has its classical origin in Chapters 85–86 of Plutarch’s Life of Antonius. As the most accredited of the sundry historical traditions tells it, after her country had been defeated and Mark Antonio had committed suicide, the queen of Egypt, faced with the ignominius prospect of being taken to Rome as Octavian’s trophey, chose to kill herself too, bitten by an asp hidden in a basket of figs brought to her by a slave. Thanks to the pathos of this drama of the last Ptolemaic sovereign, this heroine’s last act, moved by a fatal mixture of ambition, love, and despair, was a favorite theme in the culture of the Baroque. Painters of that period, however, were prone to focus their attention above all on the private, psychological dimension of that episode, especially Cleopatra’s erotic, sensual potential, which thus became—as with the Roman virgin Lucretia, with whom she is often iconographically associated—a pretext to expose the female body.

A work of such importance as Cleopatra comes from Artemisia Gentileschi’s prestigious atelier and from her repertoir of virtuous, tragic female protagonists. The rhetorical solemnity of Cleopatra reveals too lofty a conception to be attributed to a mere pupil or assistant and suggests that the work was commissioned by a person of considerable prestige and taste. We have to do with one of those cases – not frequent among the paintings attributed to Artemisia – where the excellence of the work matches the exaltedness of the artist’s name.

The attribution we are suggesting is further supported by comparison with another well-known Cleopatra, the one once owned by Matthiesen and now in the Ducrot collection in Rome. There is a marked similarity in how the torsos are molded, and in the anatomy of the feet, which can readily be likened to work by Massimo Stanzione. And the fingers grasping the asp (painted and re-painted before reaching the final form, as x-rays have shown) have the same tapered softness as the fingers gripping the knee in the beautiful Magdalene Penitent edited by Papi, now available on the Parisian art market. Moreover, Cleopatra’s stature in the Sarti painting is strikingly similar to the elevated composure of the renowned Clio at the Fondazione Cassa di Risparmio in Pisa, which the signature and date (1632) certify as a high point in Artemisia’s career. Also the bold coloring of the drapes corresponds to her sensitivity, and perhaps to that of her father Orazio as well. For instance, think of the sumptuous red curtain in the background of Joseph and Potiphar’s Wife in the Royal Collection, an impressive tour de force of mimetical illusion.

Admittedly, the queen’s head has features that are somewhat untypical for Artemisia, but these must be considered in the light of the artist’s tendency to draw on a heterogeneous multitude of types; she was famous for hybridizing her pictorial language with components from the many contexts that her activity brought her into contact with. For instance, the vigorous naturalism of the basket of figs on the right suggests the influence of her work in still lifes, attested by some sources but not sufficiently documented at present to allow for evaluation, being restricted to single examples in larger compositions.

We are left then with the question as to when the painting may have been done. Certain parallels between Cleopatra and Artemisia Gentileschi brought out by Bissell are stimulating indications that the artist was intensely interested in Cleopatria as a subject, but this is not enough to offer compelling evidence for dating the painting with any precision. One may wonder whether the ostentatious magniloquence and international implications of the painting – marked break with the typical routine of the art being produced in Naples, although one senses in the painting the presence of this substratum too – are not in some way related to the obscurity of the artist’s experience at the English royal court. The hypothesis is tempting but would require careful investigation to verify its historical validity.